Choreographer Jess Curtis, a recipient of a 2011 Alpert Award for his interdisciplinary dance work, recently visited CalArts to conduct a week-long residency with student dancers on March 5-9. As I attended the workshop, I was able to witness first-hand his experimental approach to movement, which involved voice, touch and breath. We saw the scope of a larger, ongoing experiment Curtis is conducting with dancers and researchers called, The Symmetry Project.

Before introducing us to the project, Curtis asked the dancers to move across the floor while describing every move aloud: “I am moving my right foot in front of my left foot.” It was like hearing a stranger telling me what to do. He then asked us to make a specific sound for each movement and to incorporate our breath into the movement. All of these instructions produced radically different results and ways of moving. 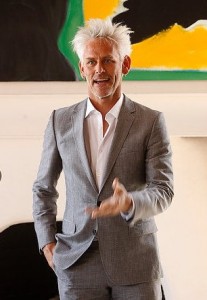 Later, we were challenged to travel while staying completely symmetrical on both sides of the body, without crossing our legs and arms. This prevents a person from walking or isolating the head or torso. “Lindsey, don’t cross your legs!” Curtis shouted as I tried to move across the floor. Pivoting and hopping with both feet seemed to be the most common way for people to travel.

The idea that sparked this concept evolved out of a duet in which Curtis and his dance partner, Maria Francesca Scaroni, would mirror each other’s every move.  They became more interested in the symmetry of the movement while still dancing with each other, creating a unique relationship that involved complete openness and trust.

“It was something that provoked many challenges and created symmetrical movement that was not normally seen in performance,” said Curtis.

Curtis and Scaroni started performing this symmetrical movement in public spaces in San Francisco in 2006 and were sought after to participate in festivals across Europe. Eventually, the duo began to perform naked—creating a biological and intimate experience in the dancers’ bare form. The perception of the body is always changing, depending on what positions the dancers are in while staying connected and symmetrical.

Curtis has been collaborating on the symmetry projects with many different artists such as photographers, filmmakers and musicians. He is even working with a neurologist in Berlin who is going to take scans of Curtis’ brain while he dances symmetrically. Photographs of the activity will be taken to see which part of the brain is activated.

Curtis explained that his passion for scientific performance came gradually out of becoming more interactive with the body and theory. He was willing to experiment with other artists and explore the perception of dance through a scientific lens.

He offered advice to CalArts student dancers. “Don’t say no to projects that experiment with dance in different ways, but don’t be hesitant to ask questions yourself. Making connections with different people can help you grow as an artist.”