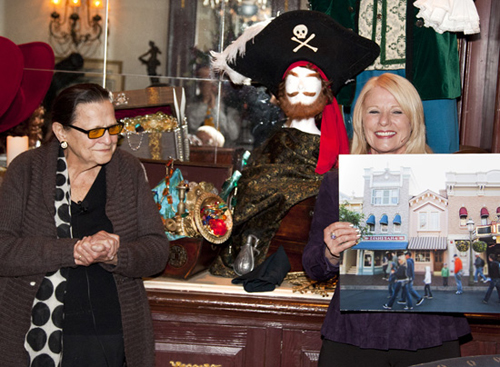 Last week, the Walt Disney Company announced that Walt Disney Imagineering costume designer and Chouinard Institute alumna Alice Davis will receive one of the company’s highest honors—her own window on Main Street, U.S.A. in Disneyland—at a ceremony on May 10.

Davis is a legendary artist, best known for creating wearable works for Disney Parks attractions, including the supervision of costume construction for some 150 dolls in the It’s A Small World ride and animatronic characters in the Pirates of the Caribbean attraction.

In 1947, Davis received a scholarship to attend one of CalArts’ predecessors, the Chouinard Art Institute, a renowned training ground for Disney artists. At Chouinard, she met her future husband, the legendary animator and Imagineer, Marc Davis (1913-2000).

Davis began her career designing women’s lingerie, and crafted her first costumes for Walt Disney Studios during the 1959 production of Sleeping Beauty. Live-action footage of the actors in costumes she designed were used by animators as a reference for how the actors, fabrics, hair and other elements moved.

In addition to her work seen at Disney Parks, Davis has helped in the development of manufacturing, quality control and refurbishment standards for the three-dimensional characters created by Walt Disney Imagineering. Now in her 80s, Davis continues consulting for the company.