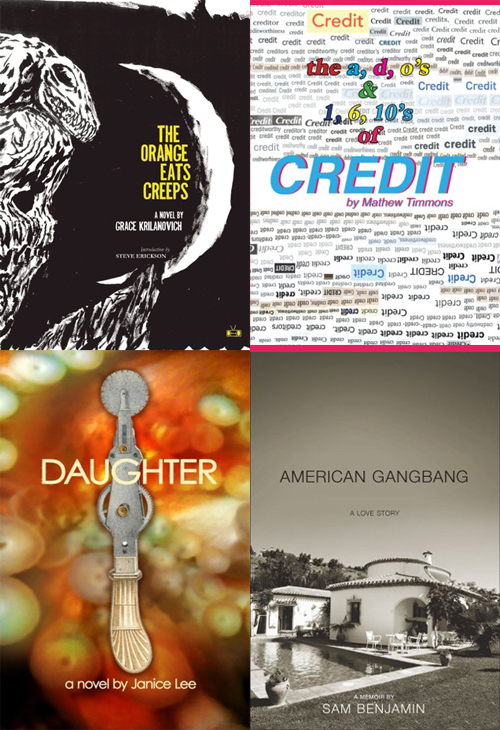 More about each author:

Grace Krilanovich‘s debut novel The Orange Eats Creeps, published by Two Dollar Radio, was a finalist for the Indie Booksellers’ Choice Award and the Believer Book Award, and was named one of Amazon’s Top Ten Science Fiction/Fantasy Books of 2010. Krilanovich is a MacDowell Colony fellow and was a National Book Foundation “5 Under 35” honoree for 2010. Her work has appeared in Black Clock and Puerto del Sol.

Janice Lee is the author of two highly-acclaimed novels: KEROTAKIS (Dog Horn Press, 2010) and Daughter (Jaded Ibis, 2011). Her work has appeared in antennae, Luvina, Everyday Genius, Action Yes, elimae and elsewhere. She is currently co-editor of the online journal [out of nothing], co-founder of the interdisciplinary arts organization Strophe; reviews editor at HTMLGIANT and was recently selected by John D’Agata as the Black Warrior Review Nonfiction Grand Prize winner.