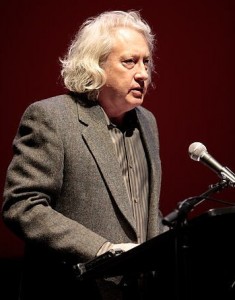 Among the list of finalists in the 2012 National Magazine Awards is a name familiar to the CalArts community.

The American Society of Magazine Editors (ASME) announced last week (April 3) that Los Angeles Magazine was nominated in the Columns and Commentary category for reviews by Steve Erickson, a School of Critical Studies faculty member, Black Clock editor and author of numerous novels and other writings.

In a recent Los Angeles Magazine column, “Alternate Oscars,” he awards best picture to Melancholia and the best director award to the film’s helmer, Lars von Trier. On the latter pick, he writes:

Director: Lars von Trier, Melancholia
Of course this Danish filmmaker is by all evidence not the guy you want at your cocktail party, what with his infantile penchant for provocation and movies that range wildly from the hollow (Europa) to the brilliant (Breaking the Waves) to the manipulative (Dancer in the Dark) to the abusive (Antichrist). But this is the most haunting film he’s made as well as the deepest and most compassionate—and what does it say about Trier (the “von” is an affectation) that for all his bad-boy posturing, his talent for eliciting consistently remarkable performances from actresses (Emily Watson and Björk in the past, Kirsten Dunst and Charlotte Gainsbourg here) is unsurpassed by any filmmaker?

The National Magazine Awards, known as the Ellies—for the Alexander Calder stabile “Elephant” given to each award winner—will be presented on Thursday, May 3, at the New York Marriott Marquis.

Erickson’s also getting recognition and excellent reviews for his latest novel of experimental fiction, These Dreams of You, which was released late last year. Listen to a review of the novel by Alan Cheuse, which was broadcast on Monday on NPR’s All Things Considered.