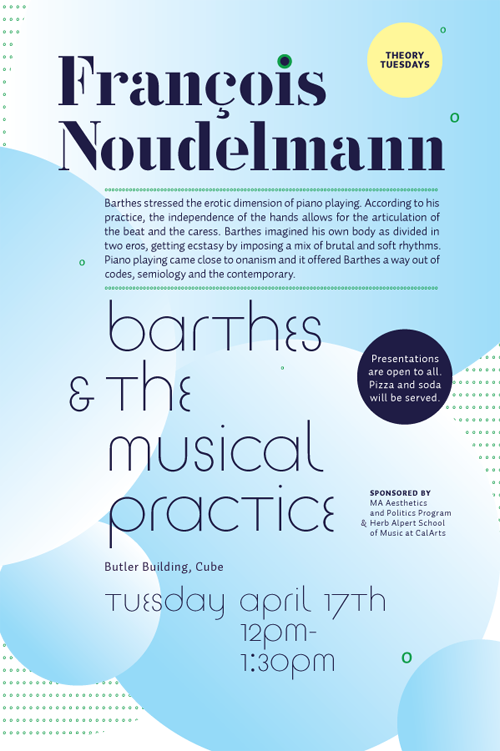 From the Publishers Weekly review:

Barthes, another daily piano player and renowned musicologist, disliked academic discussions on music, preferring instead to speak about the subject “from his own emotions and his own playing.” Instead of working toward technical mastery, Barthes pursued “privileged wandering, fragmentation, and sensible caprice,” enjoying exploring his vast collection of scores rather than perfecting one particular piece. An elegant ode to the emotional and intellectual importance of music and solitude.

In addition to his scholarly work, Noudelmann hosts a Sunday evening radio show on France culture, Je l’entends comme je l’aime.  The program “draws on the many relationships between music and the arts, philosophy, literature, poetry, science, and more.”

The Theory Tuesdays series ends on April 24 with a performance piece The Noologist’s Handbook by artist Warren Neidich, from noon to 1:30 pm at the Butler Building. Attendees are asked to bring three meaningful objects to the forum.

Both events are open to all with refreshments for attendees.