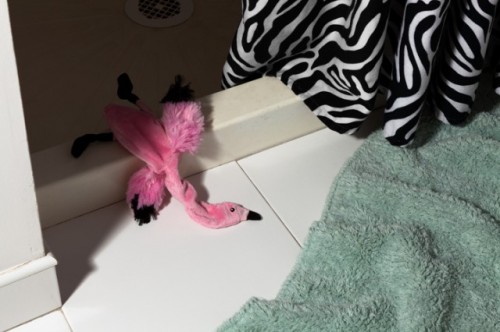 The show responds to America’s grisly fascination with crime scenes and depictions of forensic evidence, promulgated in today’s media. The staged “crime scenes” included in the exhibition point out society’s obsession with death and mortality—with a touch of humor. The resulting images are at once “disturbing and whimsical.”

In her Morbidity & Mortality series, Jeanette May examines our culture’s attraction to corpses, specifically the artfully composed images of dead bodies in contemporary films and forensic-themed television programs such as CSI. While death and Memento Mori are perennial motifs in art, contemporary US culture is awash in carefully arranged and creatively “off’d” stiffs. The artist examining this trend faces the challenge of depicting, yet not reproducing, this fetishized violence. In May’s staged photographs of recently discovered victims, the body is that of a “dead” pet toy. One realizes that the small furry object lying on the floor is a dismembered bird’s head. The cat toy is funny, but a bit twisted. There is a perverse quality to toys that resemble real animals–already deceased or clearly marked for death. May’s photographs critique the contemporary tableaus of aestheticized violence prevalent in our culture.

A.I.R. Gallery, the first artists-run gallery for women in the United States, holds an opening reception for Creature Features on Thursday, April 26 from 6-8 pm.