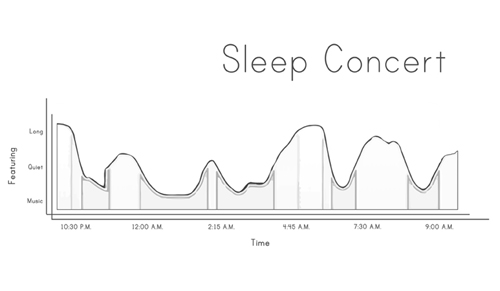 This Friday (April 27), musicians from The Herb Alpert School of Music at CalArts are holding a sleepover, of sorts—The 2012 Spring Sleep Concert: Live Nighttime Performance for Somnolent or Sleeping Audience.

The concert explores the effects of listening while dozing in and out of consciousness. Organized by Aidan Reynolds (Music BFA 13), the event features music performed by students throughout the evening—from 10:30 pm on Friday to 9 am on Saturday—in the hallway outside of The Herb Alpert School of Music’s main office.

Rich sent out a memo to radio stations prior to a 1996 Sleep Concert tour, which described his “sleep” premise.

In the early 80s I used to perform all-night concerts for sleeping audiences, lasting from about 11 pm to 8 am. I encouraged people to bring sleeping bag and pillow, and fall asleep. The music was extremely quiet and slow-moving, more like a pure atmosphere than what people generally think of as music. It was a mixture of live electronics and taped organic sounds. Part of the purpose of the sleep concerts was to transform an environment and create a break from everyday experience.

The sleep concert series has been held on- and off- at CalArts throughout the years, but were more recently revived by composer James Klopfleisch (Music MFA 10), who passes the torch to the next generation of CalArtians this weekend.

Concert attendees are encouraged to bring a blanket and pillow. For more information, visit the concert’s event page on Facebook.