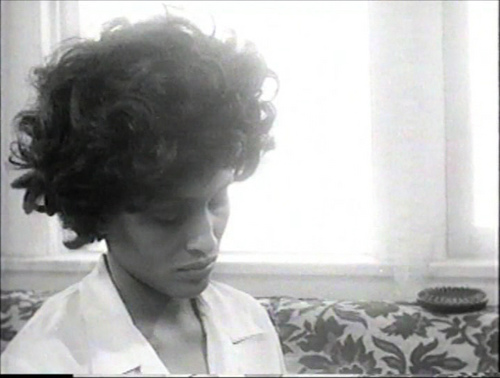 For 40 years, the Ethiopian-born filmmaker Haile Gerima has been dedicated to independent cinema, making films that focus on African or African-American narratives. Tomorrow (May 1), he screens his 1975 film Bush Mama, part of CalArts’ Structuring Strategies film series.

While a graduate student at UCLA in the early 1970s, Gerima joined the L.A. Rebellion film movement (also referred to as Los Angeles School of Black Filmmakers). Set against a socially charged atmosphere precipitated by the Civil Rights Movement, the Vietnam War and the Watts Riots, Gerima and his fellow students—Julie Dash, Larry Clark, and future CalArts faculty Billy Woodberry and Charles Burnett, among them—made films that were antithetical to classic and mainstream Hollywood productions.

While “blaxploitation” films like Shaft (1971) were financed by Hollywood studios, Gerima’s films were not. He developed Bush Mama as his UCLA film thesis on a small budget (with Burnett serving as cinematographer), after witnessing the winter eviction of a black woman in Chicago.

The film was reviewed in The New York Times in 1979 by then-critic Janet Maslin:

“Bush Mama” is fiery, furious, overflowing with rhetoric and slightly out of breath. The Ethiopian-born Mr. Gerima made the film as his thesis project at the University of California at Los Angeles, with a low budget and a lot of audacity. Its rough edges, occasional incoherence and polemical urgency all mark it as an especially passionate early effort.

Since 1975, Gerima’s been teaching film at Howard University in Washington, D.C., and creating films such as Sankofa (1993) and most recently, Teza (2008), during his academic tenure.

Following the Structuring Strategies screening of Bush Mama, Gerima will conduct a Q&A with the audience.