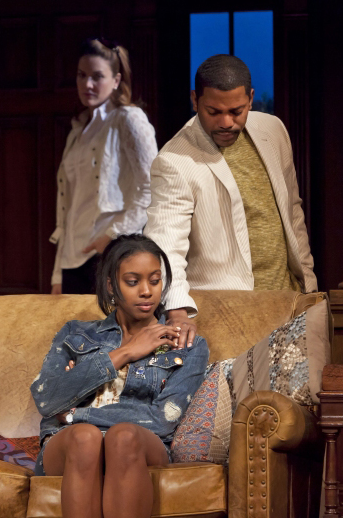 Two CalArtians were among the Tony Award nominees announced this morning in New York: alumna Condola Rashad (Theater BFA 08) for her performance in Stick Fly and Chris Akerlind, former head of Lighting Design and director of the Design & Production Programs, for his lighting on the revival of Porgy and Bess.

Stick Fly, a new play by Lydia R. Diamond and directed by Kenny Leon, marks Rashad’s Broadway debut. She plays Cheryl, the daughter of a long-time maid to a wealthy black family—raised almost as part of the family.

Rashad previously earned rave reviews for her stage work in Lynn Nottage’s Pulitzer Prize-winning production, Ruined, in a role for which she won a Theatre World Award as well as Drama Desk and Outer Critics Circle Award nominations. Other theater credits include Tambourines To Glory at the Alliance Theatre, directed by Kenny Leon, and Pearl at the Kennedy Center, directed by Debbie Allen.

The discovery of the evening is the quietly captivating Ms. Rashad, whose work here outshines her touching performance in Lynn Nottage’s Ruined. Even when she is hovering at the edges of the drama, passing in and out of the kitchen or refilling wineglasses in the living room, Ms. Rashad’s Cheryl is a powerful presence, sensitive to every hint of condescension directed her way.

The play’s more animated second act reaches a boiling point when Cheryl discovers a secret that suddenly resets her relationship to virtually all the characters onstage. Ms. Rashad finds moving shades of shock, pain and bewilderment in Cheryl’s reaction to this potentially melodramatic development. (She is also expert at delivering the character’s occasionally surly bit of talkback, when her pride is pinched.)

As a young woman from the underclass who lives amid members of a higher one, and has both the opportunity and the potential to make a better life for herself, Cheryl embodies the dynamic tensions that are central to “Stick Fly.” Ms. Rashad’s terrific performance brings a tender, human dimension to themes that are often spelled out in block letters in the writing. We become acutely aware that Cheryl is living the problems that the play’s other characters are able to theorize about from a comfortable distance.

In an interview with Live Design, Akerlind talks about the relationship of light to the physical space of the set and theatrical environment:

…I like to make light gestures that are simpatico with a set’s details, framing doors, windows, trim, and tiles in a floor, etc., or finding abstract shapes that are reverberant with the space’s geometric qualities, keeping absolutely parallel or perpendicular to contours and peripheries, and placing circles and/or ovals, at the tangents of other curved shapes, or points, for instance. Making scenes work in this context grounds the performance in the intrinsic qualities of space. Then, at dramatic moments, playing a diagonal against the square, or overlapping curved shapes, has huge impact…The quality of the relationship [between light and space], how sublime, poetic, expressive, etc., it is, and then, and most importantly, how it allows performance to happen without distraction. That’s the job in my estimation, building a beautiful space that exists only to frame a good story.

The American Theater Wing’s Tony Awards will be handed out on June 10 in New York.

The Gershwins’ Porgy and Bess trailer: