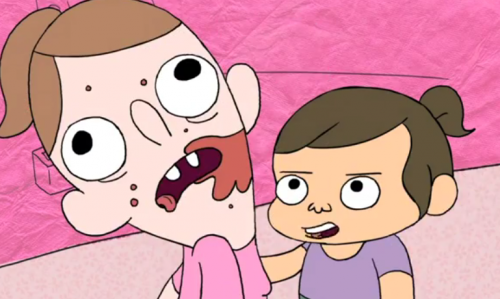 Screenshot from 'Pubertina' by Emily Brundige

The comedy website SMOSH launched a new cartoon channel on YouTube this week with original programming from animation veterans including Cory Edwards (director of Hoodwinked!, Hoodwinked Too! Hood vs. Evil), Peter Hastings (Pinky and the Brain) and Prudence Fenton (Pee-wee’s Playhouse, Liquid Television).

Among the 18 animated web series selected for the Shut Up! channel is Pubertina, created, directed and animated by CalArts student Emily Brundige (Film/Video MFA 12). The series is based on Brundige’s first-year film of the same name, which follows an 11-year-old girl—nicknamed “Pubes”—through the trials and trivializations of a ‘tween’s life.

The series debuted at noon PDT today (May 2), with a new Pubertina episode to be released each Wednesday at the same time. The series currently has a 10-episode order for this initial season.

SMOSH promotion on YouTube led to more than a quarter-million Shut Up! channel subscribers in its first week. Brundige used social media to promote the series, launching a Twitter feed (@Pubertina) for the character, earning more than 1,500 followers before the show even launched. The term #Pubertina was even trending in the U.S. on Twitter as of this afternoon.