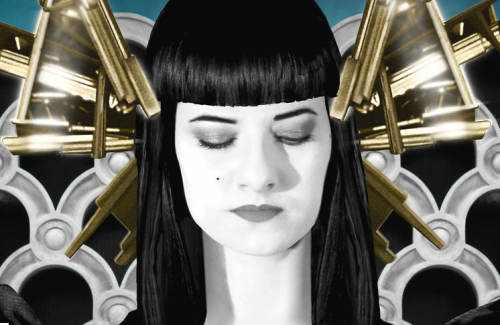 Screenshot from: 'A Little Bottle of Tears' by Jess Inglehart

On Thursday (May 3) at REDCAT, CalArts Experimental BFA and MFA animators present 17 films as part of Showcase 2012—the year-end screenings from the School of Film/Video.

Pummel Nankeen by Ismael Sanz-Pena (Film/Video MFA 11), 4:45: A collection of scenes taken or created within the narrative line of Dostoyevsky’s short story The Christmas Tree and a Wedding. The film suggests themes of social class, childhood and human interactions.

Bermuda by Calvin Frederick (Film/Video BFA 4), 4.02: A beef thief gets some ham lip and is hampered by the doo.

A Little Bottle of Tears by Jess Iglehart (Film/Video BFA 2), 4.16: A simple tale animated in Art Deco collage exploring the journey of our tears and the mysterious woman that collects them.

Possession by Rose Brauner (Film/Video MFA 2), 3:45: In an attempt to get out of the rain, a man finds himself in a curious shop with an even more curious owner.

The Pirate of Love by Sara Gunnarsdottir (Film/Video MFA 3), 10:00: A story about doomed love, vanished man and loneliness.

Grace by Dav Heim (Film/Video MFA 09)4:04: A cat. A girl. Can their mother love them both? A contest of wills and childhood subterfuge smolders as Grace tries to conceal a broken cup.

The War Profiteers by Benjamin Markus (Film/Video MFA 1), 6:33: In a war torn city, a totalitarian dictator is holed up inside a seedy bordello where he and his henchmen engage in sordid acts of limbo-like repetition. When an unknown force enters the room, peace is restored, if only for an instant.

The Jennings Account by Sean Buckelew (Film/Video MFA 1), 1:15: Clad in the finest, the grass crisp. Badminton is ordinarily played inside due to wind. 10% of men age 40-60 have an age-related midlife crisis.  Putting your Roth account in good hands can yield high returns.

The Gossip Collector by Mina Park (Film/Video MFA 1), 4:54: A woman collects garbage as a way to dig deeper into others’ personal stories.

Hole in the World by George Metaxas (Film/Video MFA 3), 3:26: The end of the world has elapsed and few humans remain. A group of survivors in Sydney, Australia, gather for a jam session in the ruins of the world, where creativity is looming in the shadows.

Triangle by Grace Rhee (Film/Video MFA 2), 6:07: What would you do if a stranger disrupted your daily routine? The choice is whether to accept this person as a friend or reject him as an outsider.

Juanita Who is Loved by Joanna Leitch (Film/Video MFA 3), 5:24: This piece explores the past tense as the sole context in which we experience others, our environment and ourselves. This film was made for my grandmother.

A Catechism of Familiar Things by Gina Marie Napolitan (Film/Video MFA 3), 8:05: A survey of the visual history of Brockton, Massachusetts, and a fractured reconstruction of one of its most infamous murder cases: the 1946 “Christmas Tree Slaying.”

Limitations by Jeanette Bonds (Film/Video MFA 1), 2:40: A 15 ft. film loop of animated scratch film, shot not frame-by-frame but in increments, one millimeter at a time. Using only this 15 ft. loop, the animator has created a longer piece, subject to certain rules; the two key rules being that the loop can only be presented in a rectangular format; and that the loops, when in motion, cannot touch.