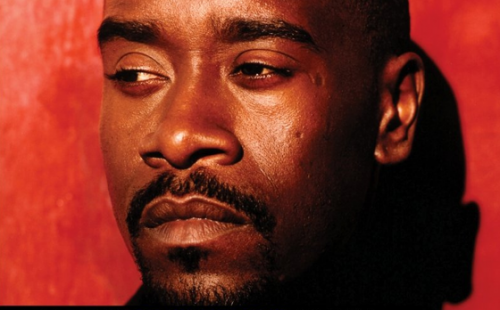 Actor and alum Don Cheadle speaks at REDCAT on Tuesday. | Photo: Permission of the artist

The CalArts Entertainment Group presents a conversation with Oscar-nominated actor, producer and CalArts alumnus Don Cheadle tomorrow (May 8th) at REDCAT. He’ll be interviewed by Deborah LaVine, co-director of the Film Directing Program at CalArts.

Though Cheadle (Theater BFA 86) now heads the cast on Showtime’s House of Lies, he began his acting career—shortly after graduating from CalArts—by picking up guest roles on popular television shows of the late 1980s-90s, including Fame, Night Court, L.A. Law, The Fresh Prince of Bel-Air, Hill Street Blues and Picket Fences, among many others.

His film profile grew after turns in the 1995 neo-Noir film Devil in a Blue Dress, for which he earned a Best Supporting Actor Award from the Los Angeles Film Critics and the National Society of Film Critics, and the Steven Soderbergh-directed films Out of Sight, Traffic and Ocean’s Eleven. He also received recognition for his role in the Paul Haggis film Crash, which won the Best Picture Oscar in 2005. For his work in the film, Cheadle was nominated for BAFTA and a Screen Actors Guild awards for Best Supporting Actor.

But the role that he’s most closely associated with is Rwandan hotel manager Paul Rusesabagina in Hotel Rwanda. The humanitarian hid and protected more than 1,200 refugees during the Rwandan genocide of the mid-1990s. For his portrayal of Rusesabagina, Cheadle earned an Academy Award nomination for Best Actor in 2005.

Outside of his acting career, Cheadle has committed himself to several charitable causes, including co-founding Not On Our Watch to end genocide in Darfur, and supporting the International Rescue Committee relief organization and the Enough Project, working to end crimes against humanity. He was named United Nations Goodwill Ambassador for the Environment in 2010.

The recently formed CEG is a professional networking consortium for CalArts alumni working in the entertainment industry that highlights CalArtian leadership in film, theater and television through a series of programs, workshops and speakers. A CEG networking reception follows Tuesday’s program.

Tickets are available from the REDCAT box office at www.redcat.org or 213-237-2800. Parking is available at REDCAT for $9.