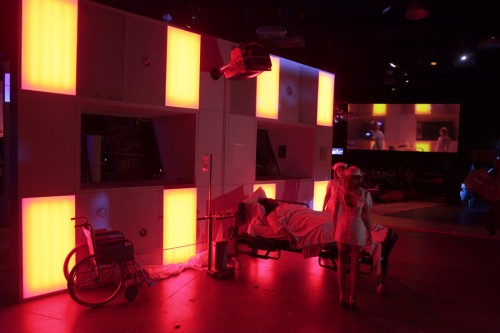 A scene from 'Crescent City.' | Photo: Steven A. Gunther

The Industry, a new experimental opera company created by CalArts alum Laura Kay Swanson (Theater MFA 10) and partner Yuval Sharon, brings more than 50 artists from a number of visual and performing arts disciplines together for its inaugural production, Crescent City, which runs May 10-27 in Los Angeles.

Created by composer Anne LeBaron, a faculty member of The Herb Alpert School of Music at CalArts, with libretto by writer and CalArts School of Critical Studies faculty member Doug Kearney, the “hyperopera”—a highly collaborative, boundary-pushing work—creates a visceral and otherworldly experience for the audience.

From the production notes:

In the wake of a devastating hurricane, Crescent City is a shell of its former self where the few remaining inhabitants struggle for survival. The bad waters of an impending new storm wake up the notorious ghosts of the city’s past, including the legendary voodoo goddess Marie Laveau (played by Gwendolyn Brown). Marie pleads with the awakened voodoo gods to save the city. They agree to come to her aid on one condition: They must be able to find one good person among the ragtag and desperate citizenry. Crescent City becomes a travelogue in search of the one who will make the city worthy of salvation.

LeBaron’s music weaves together a number of styles, including electronica, bluegrass, jazz and improvisation. The production includes a live 16-piece orchestra, conducted by CalArts faculty Marc Lowenstein, and features Timur and the Dime Museum, fronted by Timur Bekbosunov (Music MFA 08), a noted Kazakh-American performer and director.

An industrial warehouse in the new Atwater Crossing performing arts complex has been converted into a mythical landscape. Audience members stand or sit in and around the space, but are able to see and hear activity in other parts of the vast area through live video streams and sound technology.

There’s a meet-the-artists reception on Friday (May 11) from 8-10 pm to see the installations up close. We’ve posted images from Crescent City in the photo gallery above.