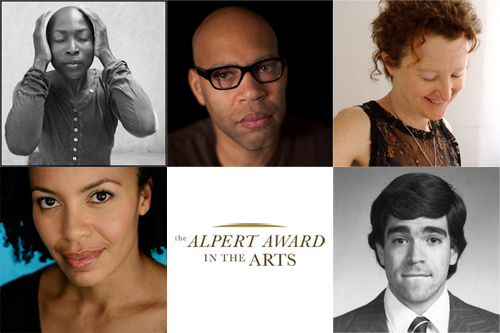 On May 11, the 18th annual Alpert Award in the Arts were announced at the The Herb Alpert Foundation in Santa Monica. The award was given to five exceptional mid-career artists in the fields of Dance, Film/Video, Music, Theatre and Visual Arts, with each recipient receiving a $75,000 prize in recognition of “past performance and future promise” in their métier.

Nora Chipaumire, Dance, was recognized for her “profound movement intelligence, steaming hot and extraordinary presence, the dialogue she creates with audiences, and her visceral struggles with critical issues of the day.”

Kevin Everson, Film/Video, was selected for his “relentless curiosity, sustained inquiry, for elevating the visual power of expressive quotidian gestures of working people and for his aesthetic caring gaze.”

The trailer for Everson’s film, “Erie”:

Myra Melford, Music, was honored for “her ascending and expansive trajectory, great, generous musical mind and her ability to take multiple musical traditions into another sphere.”

Eisa Davis, Theatre, was selected for “her profound multiple gifts as playwright, performer and musician, her portrayal of the complex richness of our American character, and her work’s relevance and epic sweep, expanding our notion of how one might live in the 21st Century.”

Michael Smith, Visual Arts, was awarded for “subversively using the visual languages of popular and corporate culture to take on big issues, for pioneering narrative within video art practice, and for rendering the everyday as truly strange.”

Considered one of the more lucrative annual arts prizes in the United States, the prize has been given annually since 1995 by musician/record executive Alpert and his wife, Lani Hall. CalArts has worked with the Foundation in presenting the award to recipients in the five categories of the arts.

Each of the Alpert Award winners will serve as a visiting artist at CalArts next year.

Read more about the recipients on the Alpert Awards website and via the LA Times article.