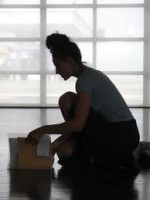 The book itself is a lengthy experiment in inversions. As publisher Les Figues Press notes, “At times the text can be read from left to right or vice versa, the poems reverberate from top to bottom or the other way around…The visual and the textual converse acrobatically.”

Founded in 1976, the $1,000 award recognizes one published translation of poetry from any language into English published in the previous year. The winning publication is selected by a noted translator, with Hofer’s bilingual edition chosen by the poet and translator Pierre Joris.

On selecting the work for the award, Joris wrote:

Myriam Moscona’s book Negro Marfil is a superbly orchestrated rhizomatic array of poems or, to quote the book, “an echo of shares.” This process of writing through the echoic first set up by the title’s ivory/black dynamic leads to a quest for new ordering principles while proposing a breath-taking & -giving investigation of sounds, colors, rhythms and forms. Arising from a first “translation” into words of the author’s india-ink images & collages, the book has now been impeccably translated into English as Ivory Black by Jen Hofer, who also provides an excellent essay on the book & the translation.

Watch Hofer read from her translation of Negro Marfil/Ivory Black in the video above, which was recorded at the third-annual Les Figues Garden Party in Los Angeles in 2011.