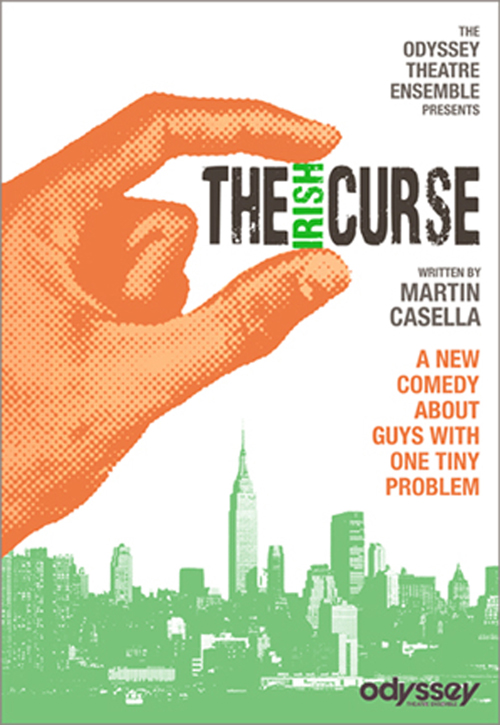 Directed by Andrew Barnicle, the production focuses on a group of Irish-American men who meet weekly to discuss “their certain anatomical shortcoming.”

From the Odyssey Theatre Ensemble:

Size matters to Joseph Flaherty, Stephen Fitzgerald, Rick Baldwin and Kevin Shaunessy. This small group of Irish-American men (all professionally successful New Yorkers) meet every Wednesday night, in a Catholic church basement, at a self-help group for men with small penises. This allegedly Irish trait is the focus of their weekly whining and bitching as they feel this “shortcoming” has ruined their lives.

One evening, when a twenty-something blue-collar guy joins the group, he challenges everything the other men thought about “the Irish curse” …tackling their obsession with body image and unmasking the comical and truthful questions of identity, masculinity, sex, relationships, and social status that define their lives.

“Some Irish Americans are convinced that the ‘curse’ is a real thing,” says Casella. “They’ve been brought up that way and taught to believe it—at least in their heads. When I heard about it, I thought, ‘this could be really interesting and even kind of fun—what if there was a support group for this?’ I’ve always believed that the way into a serious subject is through humor.” 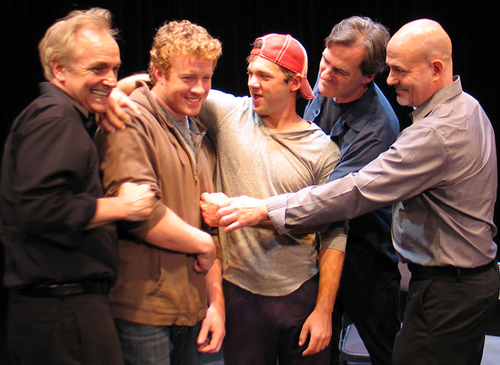 Casella says that body image is a topic to which everyone can relate.

“It’s been enormously rewarding to me that the play appeals to women as well as men,” he continues. “Anyone who has something about their body they don’t like can relate. Women have come up to me after the show and said things like, ‘I know just how the guys felt. I have always hated my nose,’ or ‘My breasts are too small,’ or ‘I hate my thighs.’ ”

Casella is not the only CalArtian contributing to the project. Scenic designer Tom Walsh (Theater BFA 77) and lighting designer Michael Gend (Theater BFA 05, MFA 09) helped to remount the work for its Los Angeles run.

Following the July 13 performance, Casella will give a post-show talk-back about the production.