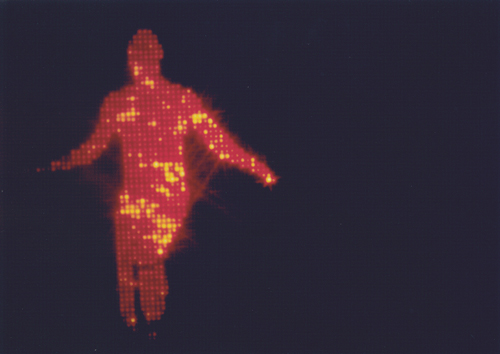 Orange County Museum of Art (OCMA) is currently hosting the exhibition Jack Goldstein x 10,000 through Sept. 9. It’s the first American retrospective of the work of the late artist Jack Goldstein (Art MFA 72), a celebrated postmodern performance and conceptual artist turned painter who died in 2003. Goldstein was one of CalArts’ first graduate students and a 1969 alumnus of the Chouinard Art Institute.

The exhibition features many of Goldstein’s never before seen films as well as paintings from the 1970s and ’80s, inspired by art history and mass-media imagery. More on the show from LA Times art critic, Christopher Knight:

Goldstein’s films are a big reason to see the show, since they are rarely shown. (Before now I had only seen two.) The one that is most-often screened — “Metro-Goldwyn-Mayer” (1975), with its incessantly roaring MGM lion—remains a standout. The king of beasts and the movie studio’s Latin slogan extolling art-for-art’s-sake drown in a field of blood-red color.

Philipp Kaiser, guest curator of the OCMA show, astutely notes that Goldstein once identified his intention to burrow down into “the gap between Minimalism and Pop art: the objectness and autonomy of Minimalism and the subject matter from our culture that’s in Pop art.” Many artists who came to attention in the 1980s shared that aim. Nowhere was he more successful in doing so than in his paintings. …

Big, brash, frankly glamorous canvases in black and white or rich, acid colors are often cinematic in flavor and imagery. 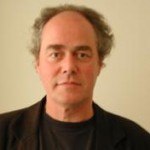 Tonight (July 19), artist and CalArts School of Art Dean Thomas Lawson speaks at the OCMA at as part of the OCMA Third Thursdays guest artist series. Lawson will share his thoughts on his own art practice, his relationship with Goldstein and their time together in New York during the 1970s.

To wrap up the final Third Thursdays of the Goldstein exhibition, artist and alumnus Elad Lassry (BFA Art & Film/Video 03) speaks at OCMA on Aug. 16.

Each Third Thursday includes a special staff led tour of the exhibition at 7 pm, with the Soho Taco Truck on site for dinner from 6:30 to 8 pm.