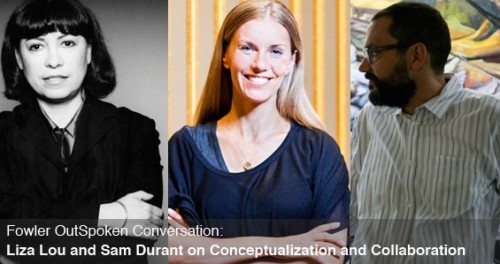 The exhibition Order and Disorder: Alighiero Boetti by Afghan Women closes this week at the Fowler Museum at UCLA, and in a culminating public program tonight (July 26), artists Liza Lou and Sam Durant (Art MFA), a CalArts alumnus and faculty member, join exhibit curator Alma Ruizto discuss the “nature of conceptualization, collaboration and fabrication” in their art.

Image from ‘Order and Disorder: Alighiero Boetti by Afghan Women’ at the Fowler

Durant, a multimedia artist, often explores the relationships between history, culture and politics. Lou, a visual artist based in LA and South Africa, is known for her sculptural installations, such as Kitchen and Backyard.

The discussion is framed by the work of Italian artist Boetti (1940–1994) who collaborated with Afghan embroiders from 1971-1994 on some of his most well-known works. The Fowler’s exhibition includes 29 works by Boetti, traditional styles of embroidery and photographs of the Afghan embroiders taken by photographer Randi Malkin Steinberger in 1990 at Boetti’s request.

Working first in Kabul in the 1970s and then in refugee camps in Pakistan after the 1979 Soviet occupation of Afghanistan, Afghan women embroidered works based on Boetti’s templates that include:  colorful grids of letters that spell out phrases (such as “Order and Disorder”); Mappe (maps), wall-sized world maps with countries filled-in with the colors and symbols of their flags; and Tutto (everything), large-scale works entirely filled with intricately embroidered shapes representing diverse objects—sunglasses, a Hindu goddess, a protractor, twins, and more.