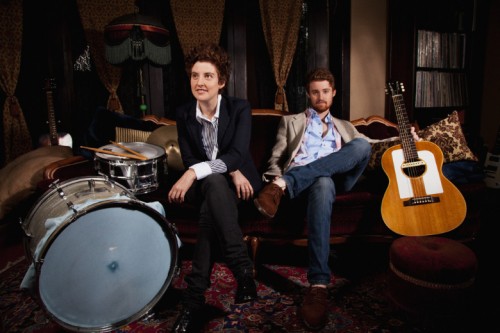 The two have music encoded in their DNA since their dad is singer-songwriter Jay Gruska, who wrote a number of hit songs for other artists including Michael Jackson, Janet Jackson and Dusty Springfield, and their maternal grandfather is John Williams. Yes, the Oscar- and Grammy-winning film composer John Williams (Star Wars, Jaws, E.T., Raiders of the Lost Ark).

Before The Belle Brigade, Barbara, who studied jazz drumming, toured with The Bird and The Bee’s Inara George, Benji Hughes and Rilo Kiley’s Jenny Lewis. But together, they’ve already built an impressive resume, playing supporting gigs for Grace Potter and the Nocturnals, G. Love & Special Sauce and k.d. lang.

Their harmonies and pop sensibilities often draw comparison to Simon and Garfunkel, Fleetwood Mac, the Beatles and the bright California sound of the 1960s. During a 2011 SXSW showcase in Austin, Texas, to promote their debut self-titled album, the Los Angeles Times’ Randall Roberts wrote about their performance:

They’re naturals, basically, with songs that are supernaturally tight and catchy; though not loud, the band’s performance at the Chop Shop show generated a half-dozen internal jukebox hits, especially the forthcoming record’s “Where Not to Look for Freedom.” It rolls with a sunny California vibe, tight, logical and precise. And “Losers,” a defiant song about ceasing to care about social hierarchies, had the crowd overjoyed. Songs go where you want them to go, sticking to the melodic road while twisting and turning within it. Though their music may not be the loudest, the most shocking or the most forward-thinking, the Belle Brigade’s songs’ power comes from the way that they can overtake a consciousness, float around inside the head and eclipse the chaos.