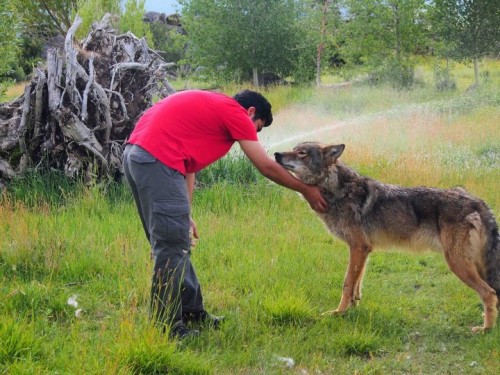 For the third consecutive summer, this past July, four CalArtians traveled to the Earthfire Institute’s Idaho Wildlife Sanctuary on the western slope of Grand Teton National Park. The two-week residency at the 40-acre site provides a rare opportunity for human interaction in a natural setting with animals such as wolves and cougars rescued from the wild, as well as some captives faced with life- threatening health issues.

The residency was again funded by CalArts’ and Earthfire’s Trustee Michelle Lund. The student participants were Saba Alizadeh (Music MFA 13), an Iranian musician studying contemporary experimental sound practices; Megan Broughton (Art BFA 12), a visual artist who works with drawing, sounds and text to tell stories; and Jamora Crawford (Interschool Critical Studies in Writing and Photo/Media MFA 13), an artist who works both on the blank page and behind the camera to produce creative nonfiction. School of Critical Studies faculty member Mike Bryant, a scientist by training, who also participated in last year’s residency, joined the students.

Bryant points out that unlike some of the larger and better-known conservancy nonprofits, Earthfire’s strategy is to try to alter human behavior toward the environment and wildlife protection by fostering direct relationships between people and animals. “Earthfire models possibilities for the future,” he says. “As humans further encroach on wild habitat, animals will either become extinct or change, and we need to consider our responsibilities either way. The recognition of this fundamental shift in our relationship to ‘wild animals’ is but the first step toward becoming stewards of a new ecosystem of wild life.

In addition the students’ own encounters, they also observed a chiropractor and holistic medicine practitioner working cooperatively with a traditional veterinarian to help a sick wolf pup, and they watched a farrier work with a rescued Clydesdale in need of new shoes. (The hooves of a Clydesdale require constant care due to their extreme size, and few farriers will shoe such a large and powerful animal.)  “The power of Earthfire’s deeply spiritual and ethical approach to sustain support for conservation,” says Bryant, “is at times matched by its ineffable nature. This is where art makes an important partner. This year, the students were able to interact with a pair of wolf pups; a baby fox, cougar, and a white buffalo calf, among the many other residents of Earthfire. These young animals embody the vitality and fragility of life and demonstrate how strongly animals rely on each other (their pack, their herd).”

“I learned very fast that each animal is a complex and multi-dimensional being with individual characteristics,” wrote Jamora Crawford in Earthfire’s July newsletter. “No two animals are alike. Just like people, you cannot assign wolves or bears or buffalo one kind of personality. This knowledge is sacred to me. I feel like I have connected with the animals here at Earthfire. Forget L.A.! Coming to Earthfire was an experience a city girl like me has never had before. I saw nature for the first time as infinite and undefinable beauty. There were no computer screens or movie theaters involved. It was just us and the animals.”

To view the students’ work from Earthfire: