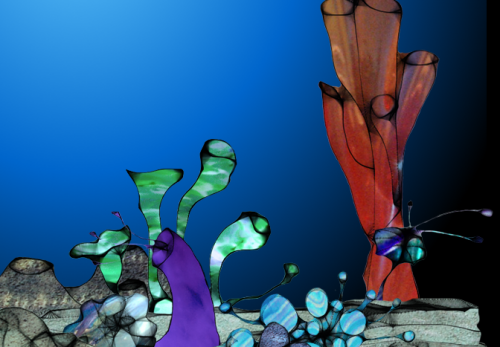 Screenshot from ‘Micropangaea,’ a music- and animation-based web project.

The press release for Micropangaea states boldly, “the lack of focus on album artwork with digital downloads… has taken some of the joy out of experiencing a record.” Composer Brendan Byrnes (Music MFA 12) and experimental animator Kerstin Hovland (Film/Video MFA 12) have answered this call to arms with a musical and graphic experience that breathes new life into both music and its packaging.

Released July 28 on Spectropol Records, the title of Micropangaea references both the microtonal scales of Byrnes’ compositions and “a fictional continent that will form on earth in the distant future.” The website, which lacks any finite pagination, instead scrolls seamlessly through virtual liner notes—one for each song and including detailed specifications on the tunings used.

Byrnes, himself, studied with CalArts’ own master of microtonal music, Wolfgang von Schweinitz. The album itself was aimed to hone these academic harmonic structures into the more palatable milieus of rock, pop and electronica.

Hovland’s work complements Byrnes’ with multi-layered, collage-like designs. Each image corresponds to a track and both describe a given locale or environment on this yet-to-converge super continent. With imagery recalling aesthetics as varied as the Magna Carta and the Los Angeles skyline, Holvand’s meticulous graphic landscapes bring Byrnes’ aural suggestions to a visual specificity.

In the past Brynes has played with Glenn Branca’s guitar orchestra and theMDR, led by Matt Walker—most known for his work with Morrissey and The Smashing Pumpkins. Hovland’s work has appeared in solo exhibitions in Iowa City and group shows in California.

To visit the website and download the album go to www.micropangaea.com. Also available is a limited-edition CD-R.