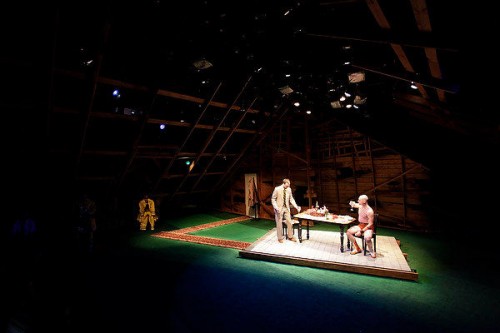 The production of ‘The Firebugs’ at CalArts in 2011 featured Vincent Richards’ set design.

The Princess Grace Foundation recently announced its 2012 awards, and among the more than two dozen recipients are CalArts students Vincent Richards, a current MFA student in the School of Theater’s Scenic Design Program, and Nijla Mumin, an MFA candidate in the Film Directing and Writing programs.

Mumin’s latest film Deluge (trailer posted below) involves underwater worlds and archetypes. From the director’s description: “Deluge is a short film that explores African American’s relationships to water, informed by such traumas as The Middle Passage, the BP Oil spill, and Hurricane Katrina, through the lens of main character Tiana, and her introduction to an aquatic underworld.”

Alumna Miwa Matreyek, (Film/Video, Integrated Media MFA 07) won a 2012 Special Project Award, which are grants available to past winners to continue the “significant projects that advance their artistic development.” (Matreyek originally earned a PGF scholarship in 2006, followed by her first Special Project Award in 2008.)

The Princess Grace Awards—grants in the forms of scholarships, apprenticeships and fellowships—were established in 1984 to recognize outstanding emerging artists in theater, dance and film. The Awards have been expanded in recent years to include playwriting and choreography.

The PGF winners will receive their awards on Oct. 22 in New York City during the 30th Anniversary Princess Grace Awards Gala, with The Prince and Princess of Monaco in attendance.