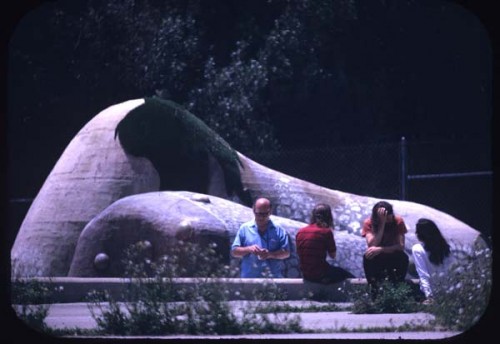 East of Borneo, a contemporary online arts magazine produced by the CalArts School of Art, recently published a 2011 interview in which Janet Sarbanes, director of the MFA Writing Program at CalArts and author of the short story collection Army of One, talks to artist Alison Knowles about her time at CalArts during the Institute’s early days.

Knowles was recruited by CalArts founding faculty member Allan Kaprow to teach at CalArts in the late 1960s. Both were active in the Fluxus movement—comprised of artists, composers and designers who were noted for blending media and creating interdisciplinary works—and their influences have left an indelible imprint on the Institute.

She remembers Kaprow fondly, recalling, “…Kaprow, I think, had the vision of a school based on what artists wanted to do rather than what the school wanted them to do.”

In the course of the extensive interview, Sarbanes asks about her interaction with her fellow faculty members (such as Judy Chicago, James Tenney, Paul Brach, Nam June Paik and Knowles’ husband Dick Higgins) and administrators, including CalArts’ first president Robert Corrigan and its first Provost Herbert Blau.

They also discuss campus art happenings and a few of Knowles’ works—from the House of Dust to 99 Red.

Here’s how she describes the latter project to Sarbanes:

I also did a piece called 99 Red on the tennis court of the first CalArts campus [the Villa Cabrini in Burbank]. I lined up 99 apples, not all in one line but in three lines, and the idea was that you could take an apple if you put something in its place. So I have a wonderful slide of someone who left his car keys because he’d always wanted to walk to work. [laughs] He took his apple and left his car keys.