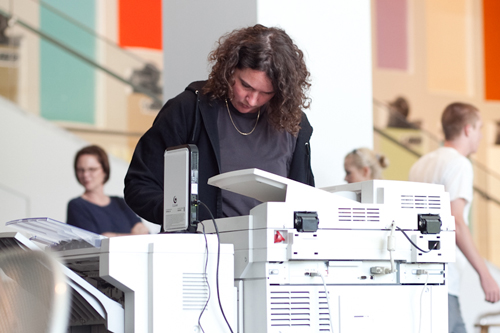 Los Angeles’ first biennial, Made in LA 2012, which is full of CalArtians’ work, wraps up on Sept. 2. One of the exhibition’s hosts, the Hammer Museum, recently interviewed artist and CalArts alumna Fiona Connor (Art MFA 11) regarding her project, Lobbies on Wilshire Publishing House, which was installed in the museum’s lobby from June 28-July 12.

For her installation, Connor, along with several collaborators, organized a workshop and publishing house in the lobby to create an alternate catalog for the exhibition. Generating content by collecting documentation and reactions to the exhibition and events from visitors, Connor printed articles using a photocopying machine installed in the lobby, and distributed them daily. 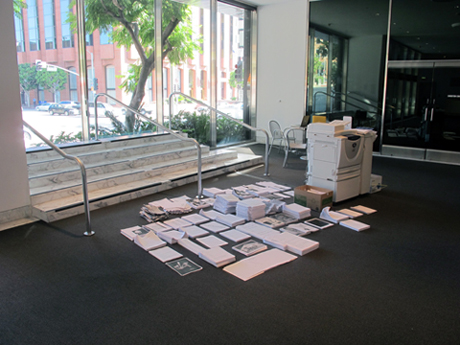 [I]t started with being invited to respond to a lobby…Part of [my] proposal was to take all the printers from the whole building and relocate then in the lobby. I’m interested in how upstairs, in the admin offices, there’s all this printing and production that goes on, but there’s no visibility, so taking that site of production and transferring it to the lobby—so that every time somebody prints something from admin, they would come downstairs and gather their printing.

I thought if the [catalogue] gets generated and produced in the [lobby] space…[it becomes] another type of architecture of an exhibition [that] moves past the parameters of the show. If [one] puts as much rigor and thought into the documentation as the work itself, [it could be] acknowledged as a new site.

Connor says the entire volume of catalogs will be placed in libraries in LA and scanned to PDF for the web.

Read the rest of her interview with the Hammer Museum.