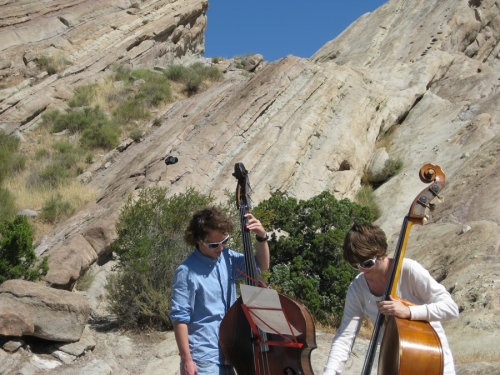 Now it in its eighth iteration, the Dog Star Orchestra’s summer concert series expands beyond the Los Angeles County line.

Beginning today (Aug. 28), the loose collective of CalArts’ musicians and composers, led by CalArts faculty member and composer Michael Pisaro, continues the tradition of performing music and pieces in nontraditional concert spaces, which this year includes several streets and plazas in Mexico City.

In an “extended concert of voices” in Mexico, the TRACTO ensemble performs co-curator Camina Escobar (Music MFA 10) piece Linderos on Thursday in and around the Plaza de las Tres Culturas. As the main square within the city’s Tlatelolco neighborhood, the area lies at the intersection of three distinct eras: pre-Columbian, Spanish colonial and the modern era and seems a fitting setting for a composition that translates loosely into “bordering” and “outlying.”

With more than a dozen other concerts scheduled during the next two weeks, Dog Star Orchestra members will also perform at private residences, along the banks of the LA River and at the wulf performing arts space near Downtown Los Angeles.

Here are a few other highlights: