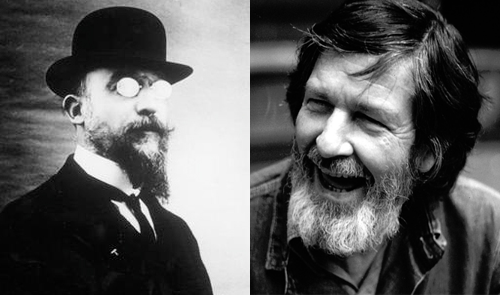 It’s been a busy year for fans of the experimental American composer John Cage (1912-1992).

2012 marked the groundbreaking composer’s 100th birthday, with celebrations at REDCAT, CalArts and in motel rooms in Los Angeles. The festivities continue in September, when the Santa Monica-based contemporary music consort, Jacaranda, presents the Cage 100 festival.

Featuring Cage and Cage-esque performances from Sept. 6-9, the festival’s highlight is a 24-hour marathon performance of Vexations (1893), written by the eccentric 20th-century French composer Erik Satie (1866-1925). The piece begins on Sept. 7 at 7 pm and continues until Sept. 8 at 7 pm at the Miles Memorial Playhouse in Santa Monica.

Vexations, a piece which CalArtians performed in 2009, was a favorite of Cage’s, who published the piece in 1949. Jacaranda explains on their website:

This work was long considered a joke until Cage organized the first performance in 1963. Eric Satie, a composer Cage idolized, asked that three bars of music – less than a page – be repeated 840 times.

Jacaranda’s rare complete performance will employ 32 pianists playing successively without pause. The audience is free to come and go as space permits and are encouraged to bring cushions for casual seating.

The juxtaposition of the two composers for Cage 100 highlights their similar sensibilities and suggests Satie’s importance as an avant-garde composer.

Among the pianists are CalArtians:

Though the performance is free, make sure to RSVP if you plan to attend.

In addition to the Satie piece, CalArts faculty member Vicki Ray performs prepared piano alongside other musicians for Cage’s pieces The Perilous Night (1944) and The Ten Thousand Things (1954-56) on Sept. 8 at the Santa Monica Bay Woman’s Club at 8 pm.  For more info and to reserve tickets, visit the Jacaranda site.