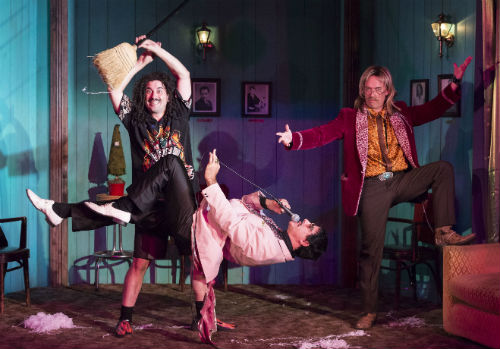 ‘Elephant Room’ was commissioned by the Center Theatre Group and features a number of CalArts alumni behind the scenes. (Photo: Craig Schwartz)

Reviewers of the Elephant Room, which had its West Coast premiere earlier this month at the Kirk Douglas Theatre in Culver City, are going to great lengths to not reveal too much about the show.

As we understand it, it’s part magic show and part comedy that focuses on three magicians practicing their skills in a basement—to varying degrees of success. And then things get weird. That’s all we can decipher, but so far, people are liking what they see onstage.

Don’t let the retro styling fool you. Although they look like comic extra rejects from a ’70s variety show with some heavy metal updating, the magician-trickster-funny-men of “Elephant Room” are goofy originals, very much of our makeshift moment…

They succeed by the seat of their pants, which is to say through their collective free-form wits, recognizing that the only definition of theater that matters is the one that begins with giving pleasure to an audience.

Elephant Room runs through Sept. 16 on Tuesdays through Sundays at 8 pm (dark on Mondays). Additional matinees on weekends.