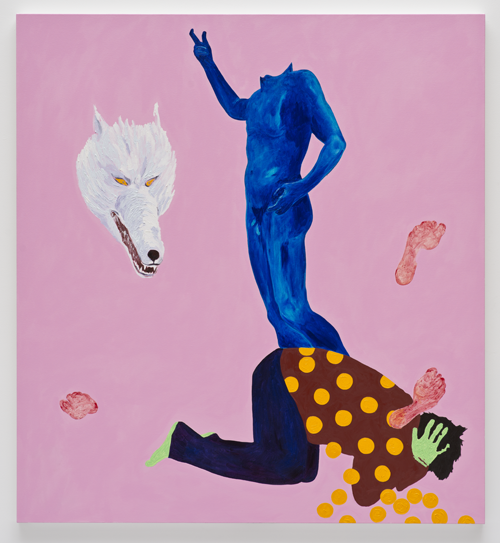 Thomas Lawson, dean of the School of Art, is kicking off a new school year with In the Shadow of the Beast, an exhibition of his new paintings at the David Kordansky Gallery in Culver City, Calif.

The show, which includes both medium and large-scale canvases, opens with a reception on Saturday (Sept. 8) and runs through Oct. 20. The gallery describes the work as part of an “on-going investigation of allegory and the human figure.”

In the Shadow of the Beast follows closely with the form of Lawson’s 2010 work, although he brings a new fascination with mythology, cave paintings and sculpture to the newer works. The colors are bold, flat, contrasting—creating an almost collage-like feel.

There is a constant juxtaposition between human and animal figures or sometimes fabled beasts—such as Walking on Water, the right side of which is dominated by a centaur in monochromatic red, or, Voluptuous Panic with its strangely disembodied Werewolf’s head hanging over the rest of the composition, a watch dog to Lawson’s hybrid aesthetic.

To quote the gallery’s release: “Here painting, even absent of image, is shown to be an essentially figurative activity—and instructive too for decoding the degrees to which media are by turns disembodied or aggressively physical.” For once both the beast and its shadow are the figurative, and inside the shadow’s layered planes we find the psychology of an intricate new environment—a geometry of distinct un-abstraction.

The Scottish-born Lawson has exhibited his work at Anthony Reynolds in London, LAXART in Los Angeles, MetroPictures in New York and was featured in Made in L.A., the city’s first ever biennial, coordinated by LAXART and the Hammer Museum. Surveys of his work have been presented at The San Diego Museum of Contemporary Art at La Jolla among other places. He is also a dedicated writer of criticism and since 2009 has served as Editor-in-Chief of East of Borneo, an online magazine of and about contemporary art serving as a “collaborative archive.” All with a slant towards celebrating and investigating the future of Los Angeles as an artistic center.