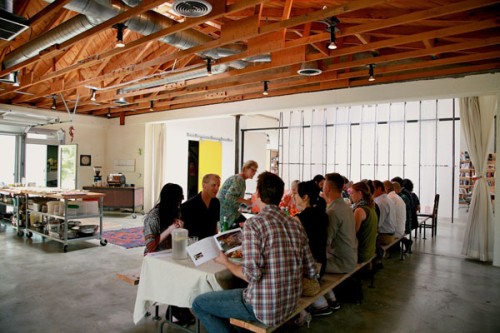 David Thorne, artist and creative director of the food space elysian, comes to CalArts on Thursday for a ‘cook-on’ with artist Jen Smith.

Artists Jen Smith and David Thorne will be cooking in the CalArts kitchen on Thursday—literally.

The School of Art’s annual Paul Brach Visiting Artist Lecture Series opens with a “cook-on” between the artists, who’ll discuss the roles cooking and food play in their artistic practices. Concurrently, the artists and students will prepare a vegetarian meal together, made from ingredients that Smith and Thorne have sourced locally in Los Angeles. 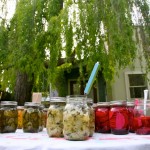 “Both Jen and David will continue to talk as they prepare the meal, in hopes of creating a more dynamic and lively lecture format,” notes Heather M. O’Brien (Art MFA 13), one of the series’ coordinators, in an email. “After dinner is ready, there will be time for more conversation as we all eat together in our communal studio space.”

While Smith made her mark as an artist, activist, zine editor and musician (she was a pioneer in the riot grrrl feminist punk rock movement), she now also runs her own catering business, Full Moon Pickles. In an interview with the Huffington Post in 2010, she spoke about her art background and her culinary career:

HT: I know you have an art background. Can you talk a bit about how you made the leap from art to food and how they connect for you?

JS: Art making and cooking are central life practices for me – both make me feel good about being alive. So there hasn’t been a formal decision to pursue one over the other.

I often feel like art is an eccentric pursuit, and eating is something that every human has to do daily. Getting out of graduate school in a poor economy, I have been trying to figure out how to support myself on my own terms. In terms of the way the two connect, there is the obvious relationship between making something with one’s hands and creativity. But also I see the impulse to preserve food as a sort of utopic response to excess and bounty. My formal art work also deals with excess but from a dystopic perspective.

Not as widely known as his art practice is Thorne’s culinary pursuits. He serves as chef and creative director for elysian, a food space in Atwater Village (in Los Angeles), where people come together for food, discussion and celebration. It’s known for its Monday dinner series called night in, which Thorne described in Artforum’s “500 Words” column:

Since 2005 one of my primary interests has been cooking. After I finished grad school I worked professionally in several LA restaurants. It’s not easy to make a living just making art. More recently, I decided to try to use this space for something new, and I also wanted to keep cooking but in a different type of setting, just to see what that would be like. Nonetheless, for all intents and purposes, the “Night In” suppers work like a restaurant. You make a reservation, you show up, then you sit down, someone comes and brings you something, takes your order, puts the order in, the food comes out, and so on. But people seem to sit and stay here longer, which has been really nice to see. It has to do with the feeling of the place. A lot of restaurants are just too schticky for me—even if they’re trying to be casual. I also feel fortunate to have the artist and filmmaker Wu Tsang managing events and developing that whole aspect of the enterprise.

O’Brien adds that she and fellow coordinators Vivian Sming (Art MFA 13) and Emily Shanahan (Art MFA 13) took the advice of their CalArts colleague Dina Sherman and faculty member Ashley Hunt to name the kick-off Paul Brach Lecture a “cook-on” rather than “cook-off” because the latter intimates a competition. They also wanted to incorporate cooking and conversation into the mix for the first event, rather than a traditional lecture or panel format.