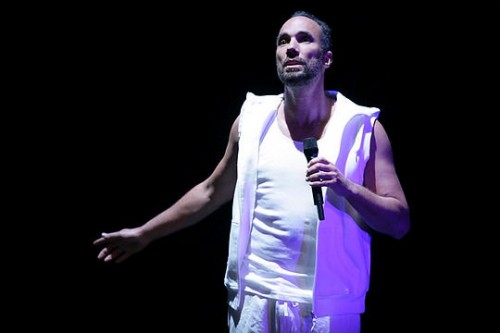 From Roger Guenveur Smith’s performance in ‘Iceland’ at CalArts.

CalArts School of Theater faculty member Roger Guenveur Smith takes to the stage with his latest work Rodney King in a limited-run production at the The Bootleg Theater (Sept. 20-28).

Under the direction of Smith, the one-man show sheds new light on the life of the late Rodney King, a man who’s famous question, “Can we all get along?” continues to resonate 20 years after it was first posed to a riot-torn Los Angeles in 1992.

King ascended to prominence via a vicious beating by members of the Los Angeles Police Department in 1991, which was captured on videotape and broadcast internationally. The four officers’ acquittal the next year provoked the most deadly civil disturbance in United States history.

The Obie Award-winning actor, writer and director known for his history-based work and his ability to “command the stage with a charismatic, deliberate presence,” says KCRW’s Anthony Byrnes. “His lithe body is almost constantly in motion swaying and embodying the words in a choreography that’s both evocative of the action and expressive of a deeper rhythm.”

Smith’s relationship with The Bootleg Theater is a deeply-rooted one, describing the 1930’s warehouse his “neighborhood theater.” Boundary pushing and highly collaborative, the Bootleg has been home to Smith’s past works Patriot Act, Fredrick Douglass Now, In Honor of Jean-Michel Basquiat and the premiere run of Who Killed Bob Marley?

His additional credits include the adaptation of his Obie Award winning solo performance A Huey P. Newton Story into a Peabody Award-winning telefilm; Juan and John, an international success inspired by the remarkable friendship of baseball legends Juan Marichal and John Roseboro; The Watts Towers Project, inspired by the Simon Rodia masterwork; and Inside the Creole Mafia, a show the LA Weekly called, “Production of the Year.” This semester at CalArts, he’s teaching Acting Studio III, focusing on performing the modern classic works of Chekhov, Ibsen and Strindberg.