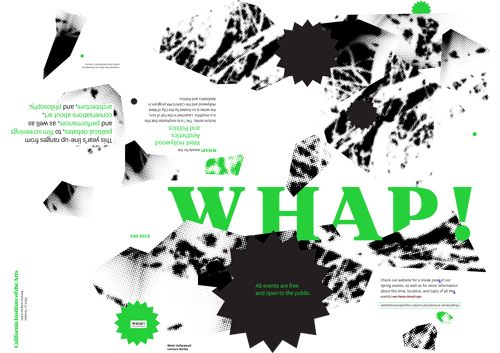 WHAP!—the MA Aesthetics and Politics program’s year-long series of lectures and events in West Hollywood is back. The series opens tonight (Sept. 21) with author, historian, civic leader and political commentator Nancy Cohen and West Hollywood councilmember John Duran for a conversation about electoral politics and the fight for equality.

“This debate will focus not just on the upcoming US presidential election, but on how to advance the cause of equality during such an election (and others like it),” says Director of MA Aesthetics & Politics and CalArts faculty Arne De Boever.

Other WHAP! events announced for this fall:

All events are free and open to the public. Pay parking is available in the library structure, but parking will be validated.