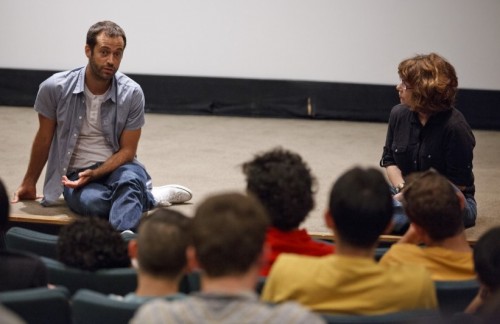 Deborah Lavine, co-director of the Film Directing program, introduced Millepied as a diverse artist whose artistic endeavors were not limited to ballet. Since retiring from the New York City Ballet in 2011, where he had been principal dancer since 2002, Millepied now has more time to dedicate to projects that involve film, art, dance, music and multimedia.

Stage managed by Danielle Korman (Theater BFA 12), the Project made its official debut at Walt Disney Concert Hall in September with a program that included Merce Cunningham’s controversial masterwork “Winterbranch,” which hadn’t been performed since 1976; William Forsythe’s 1993 “Quintett” and Millepied’s new work “Moving Parts” with score by Nico Muhly. (The Project continues on a worldwide tour later this month.)

Millepied told the audience in attendance at the Bijou Theater, comprised mostly of student filmmakers, dancers and composers, that he’s particularly interested in film because the medium captures “how music, image and dance comes together,” and allows directors the freedom to “choose various perspectives…and control the environment” for the camera.

In 2010, Millepied stepped behind the camera for the first time to direct his first short film featuring Lea Seydoux with a score by Angelo Badalamenti; last year, he directed five short films set to new violin works by Phillip Glass, and just last month, he captured the freestyle movement of hip-hop dancer Lil Buck, set to an electric guitar version of Bach’s 1741 “Aria” from the Goldberg Variations (played by Millepied’s brother Laurent).

“This film [Aria] is completely improvised,” said Millepied. “It’s about giving a sense of place and atmosphere.” [video below]

Millepied’s lecture at CalArts was structured around a robust Q&A session with students that covered topics ranging from his work on Black Swan to this thoughts on Wim Wenders’ 3D dance film Pina, to advice for collaborating with dancers and composers. He stressed the importance of music to his work, telling students that “everything comes from the music.”

When asked about his film influences, Millepied cited both Orson Welles and Robert Bresson. He pointed to the latter’s train scene in Pickpocket as a good example of non-dance choreography on film.

Millepied is currently working on other films as well as collaborative art projects, including an installation with choreographer Daniel Cloud and CalArts Theater faculty member Jon Gottlieb on sound design.