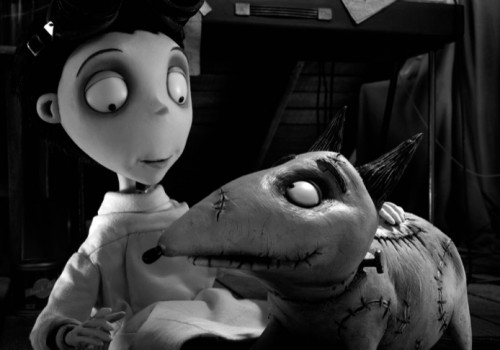 Tim Burton’s (Film/Video 79) animated feature Frankenweenie opens nationwide today, paying homage to classic horror films and the original Frankenweenie. According to Martin Short who voices three characters in the new film—in conversation with David Letterman on The Late Show last week—the film began as a live-action short while Burton was a student at CalArts, which he continued to develop during his time at Disney in 1984.

The updated release is a black-and-white stop-motion animation that follows a socially awkward young boy, Victor, who conducts science experiments to bring his beloved bull terrier, Sparky, back to life.

Things go awry with Sparky’s reappearance, and Victor has to convince the people of suburbia that despite appearances, the dog is still the same loyal and loving dog.

The artistry reaches absolute perfection. “Frankenweenie’s” characters are a true reflection of the darkly ironic mind of the director and the film overall is a paean to the meticulous craft of stop-motion, a process so difficult and demanding, you must love it to do it, and Burton has never done it better.

The film also re-examines similar themes found in earlier Burton films, such Edward Scissorhands: that of the outsider and intolerance in suburbia. In a recent NPR story, Burton notes that Frankenweenie is his most personal project up to date. He, too, had a beloved dog that died, and like young Victor, he felt like an outcast growing up in 1950s Burbank, Calif.

NPR correspondent by Mandalit del Barco visited CalArts for the story and talked to several animation students about Burton’s work and influence:

Student Vitaliy Strokous credits Burton with helping to revolutionize modern animation with his pop-surrealist sensibility. While Disney cartoons were known for being cute and cuddly, Strokous says Burton “made the grotesque really accessible and really appealing.”

Listen to the NPR story.

Watch the trailer from Frankenweenie (2012):