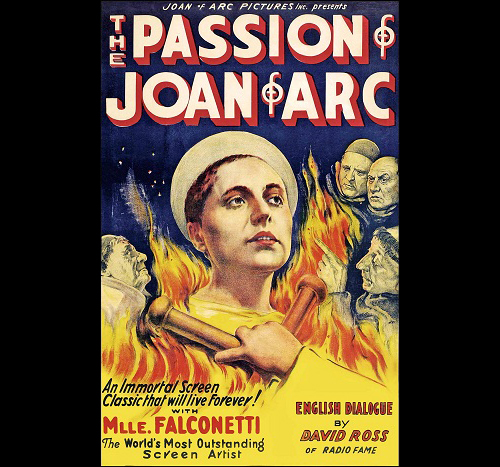 ‘The Passion of Joan of Arc’ will be screened with a new original score in Gary Mairs’ Film History class.

Silent movies are making a comeback. Early this year, The Artist, a silent feature about the silent era, won five Academy Awards. Now, the premiere of contemporary Spanish silent Blancanieves at the Toronto Film Festival and the current Broadway run of the musical Chaplin, depicting the life of screen legend Charlie Chaplin, reflect a digital-age fascination with bygone forms of film production.

Since 2004, Gary Mairs’ Film History class at CalArts has given classic silent films 21st century make-overs. At Mairs’ invitation, faculty, students and alumni create contemporary written and improvised musical scores that are performed live during screenings of classic silent films. His goal is for students to “see how alive silent films can be. These movies are old, but they remain powerful, complex experiences.”

This semester, silent masterworks such as Alexander Dovzhenko’s Arsenal and Robert Wiene’s Cabinet of Dr. Caligari take on new life with accompaniments ranging from experimental electronica and a live DJ mix, to jazz for string quartet and Balkan dance music with a contemporary twist.

“I try to pair the films with musicians whose work I admire and who have a sensibility that will speak to the films,” commented Mairs. “The one thing I don’t want them to do is try to imitate what they imagine to be period-appropriate scores with cute, jaunty solo piano. The films are so much stronger than that: a film by Buster Keaton or Gemaine Dulac can stand up to challenging music, and is usually even richer for it.”

Mairs’ pairings of music and film for 2012 include:

What’s next for silent films at CalArts? “I have a few dream projects that haven’t happened yet,” said Mairs. “Someday, I want to pair F.W. Murnau’s Faust with an aggressive, droning metal band–something like Sleep’s Jerusalem LP. Done right, this could be completely overwhelming.”

Listen to a clip from Robninson’s score for The Passion of Joan of Arc:
Excerpt_from_Score_The_Passion_of_Joan_Arc