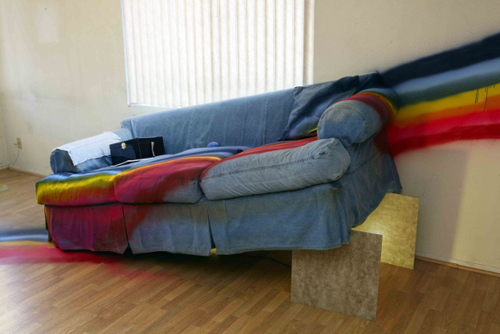 The house at 3411 Holyoke Drive in the Glassell Park section of Los Angeles looks inauspicious from the outside—except for the fact that it’s painted top to bottom in metallic gold. But even that hardly hints at what’s inside. The two-story stucco home was built during the development boom of the ’70s and ’80s, of cheap lackluster housing in the neighborhood. A little box on the hillside “made out of ticky tacky,” as the song goes.

Since September, artist and CalArts alumna Olga Koumoundouros (Art MFA 01) has occupied the property, hosting public art events in the backyard and turning the structure itself into an installation and comment on the concept of “home,” of the rising number of foreclosures following the 2009 financial downturn, and of gay rights. She calls the project A Notorious Possession—a play on the legal statute of “Adverse Possession” which allows persons ownership of a property they’ve lived in for an extended period of time, legally or not. But this isn’t Koumoundouros’ home. It was Glenda and Patti’s.

The property was a family-owned home. When the parents split they left the house to their son, who then gave it to his sister, Patti. Thus the house was paid for in full and Patti lived there for decades with her partner, Glenda, until 2006 when they took out a second mortgage. Sadly, Patti died of brain cancer and Glenda, who may have been living on Patti’s pension, had no choice but to abandon the house and go to live with family in Kentucky. Ms. Koumoundouros lived across the street and when the house was left empty, public art was not her initial inspiration. She had financial woes concerning her own mortgage and considered squatting in the house while renting out her own. When she entered the house, however, everything changed.

“[My partner and I] found a box designated for Patty’s ashes and felt very uncomfortable about moving in,” the CalArts alumna told KCET. “As a [sculptor] I became obsessed with the desire to build a structure to house Patty’s ashes… a long-standing question of mine is, how can I show embodiment within an inanimate object? Or, how can objects show a life lived?”

Koumoundouros took over the house with the intention of creating a public art space that would shine a light on Patti, Glenda and many others’ trials. The house was the third or so foreclosure on the street since the housing market collapse. First, she painted the entire exterior gold to, “make the house even more of an object… I want it to look like a commodity in the most blatant way.” On the inside of the house there is a painted rainbow running along the wall that travels from the living room up the stairs and through the bedrooms. Koumoundouros has mixed in personal objects of her own with those Glenda left behind. A fake fridge door displays a hodgepodge of remnants of three persons’ lives, photos and mementos of separate existences—different, yet so much the same.

On Sept. 16 Koumoundouros officially opened the house to the public with a slew of performances. Since then she’s continued to document the unfolding of events on the project’s Facebook page. On Sept. 20 an LAPD officer came to the house and told Koumoundouros to leave. When she said she wouldn’t, the officer left. The next day Koumoundouros announced that the house would no longer be open as an installation but that she would still hold date-specific events there. On the 24th the house went up for auction. An ongoing struggle between the artist, the LLC that owns the house and the LAPD ensued.

On Oct. 4 a representative of the LLC and the LAPD went to the house. “I was given an ultimatum. Criminal trespass charge or leave, so I left,” Koumoundouros reported on the social media site. Since then the only update came on Oct. 5, “Stay tuned for a screening of the lock out!” Although it would seem that A Notorious Possession has come to an end, with Koumoundouros’ continued experiments in spatial sculpture and the occupation of properties—for either political or artistic ends—popping up across Los Angeles and other cities. It’s certain that the waves of what Koumoundouros has done here will reverberate widely for quite some time.