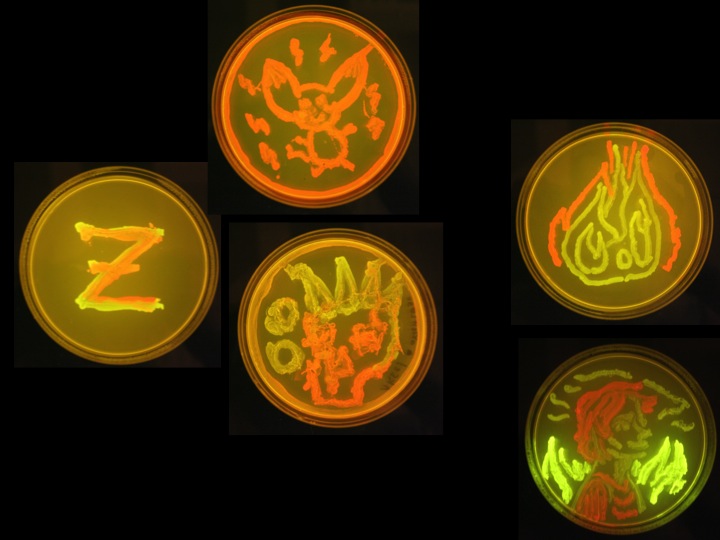 Last month, several CalTech students and three CalArts students—Charles Hodgkins (Film/Video BFA 14), Theresa Latzko (Film/Video BFA 14) and Michael Piazza (Film/Video BFA 14)—teamed up to create short animations via petri dishes containing E. coli bacteria that is genetically modified to glow on exposure to projected light. Since the images took time to “grow” and process, the details of the project were recently published on the project’s website.

To prepare for the upcoming International Genetically Engineered Machine (iGEM) competition on Nov. 2-5, the CalTech team came to CalArts on Sept. 27 to discuss “animating on a living screen.” Led by Critical Studies faculty member Douglas Goodwin, the CalTech and CalArts students presented the animations, which were created with luminescent proteins derived from jellyfish found off the California coast. Other students in attendance were also given an opportunity to create their own drawings (see photo gallery above).

Since bacteria is much smaller than pixels, images and animation could potentially have very high resolution; this cutting-edge technique is still in its infancy.

More about the students’ objective on the iGEM site:

Previous studies have shown that high-definition images can be produced by Escherichia coli using projection of a pattern of light onto the bacteria. The principal objective of our collaboration was to introduce a tag that would degrade the emission of red fluorescent protein (mCherry) while it is created and use a projection of moving images to create an animated bacterial lawn.