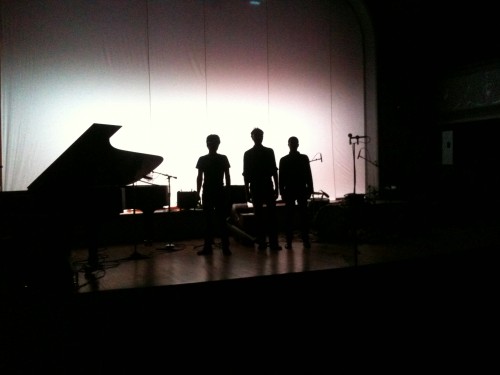 In a recent article in The New Yorker, pop music critic Sasha Frere-Jones describes how the band uses the tools of a jazz trio to “summon” the repetitive tones and patterns of electronic music:

Pieces stretch on for minutes without a melody intruding; drums are played largely without the addition of cymbals; and piano parts are one-handed, so that Belyamani can dampen the strings with his other hand. The resulting mesh falls somewhere between modern classical and laptop-generated music. In May, the band played live at Roulette, in Brooklyn, along with a short film called Kashmir, made from footage shot in the region. An hour flew by in what seemed like minutes.

In 2010, Dawn of Midi released its debut album, First, which was well-received by critics. The band’s sophomore album, inspired by minimal electronic dance music, is scheduled for release in early 2013 on Thirsty Ear Records.

After developing the new album for the last two years, the group says it has unveiled a new music genre. Minimal-Acoustic is “a rhythmic language with roots in IDM and Minimal House Music, distilled into its essence and performed live by acoustic instruments.”

To hear a live preview of the record (and the newly defined genre), catch the band perform at Joe’s Pub in New York on Saturday, Nov. 24 at 9:30 pm. You can also listen to tracks from First on their website.