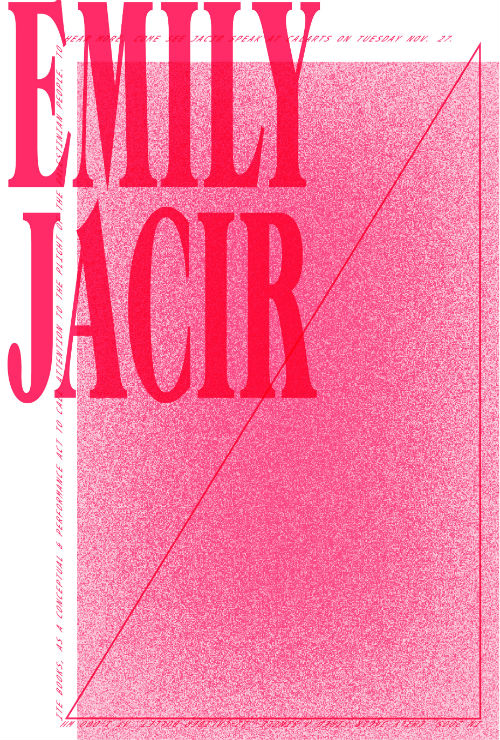 Artist Emily Jacir, a 2011 recipient of the Alpert Award in the Arts, visits CalArts this week for studio visits and as the guest speaker for tonight’s (Nov. 27) Paul Brach Lecture Series.

Originally from Palestine, Jacir spent her childhood in Saudi Arabia, attended high school in Italy, and studied art at the University of Dallas, Irving (BFA) and the Memphis College of Art (MFA). She is currently a full-time professor at the International Academy of Art, Palestine in Ramallah.

Working in a variety of media, including film, photography, installation, performance, video, text and sound, Jacir’s art has focused on political issues, movement and transportation, historical narratives, translation and exchange, and the repression of culture.

In addition to the Alpert Award, Jacir has also won the 2008 Hugo Boss Prize by the Solomon R. Guggenheim Foundation and participated in the 2004 Whitney Biennial.

In Where We Come From (2001-3), her photo and text series (with one video) for the Biennial, she asked more than two dozen Palestinians a simple question: ”If I could do anything for you, anywhere in Palestine, what would it be?” Using her U.S. passport to enter Palestinian lands difficult—or impossible—to reach with a Palestinian passport, Jacir documented her attempts at trying to fulfill the sometimes impossible requests.

In 2007, she won a Golden Lion for an artist under 40 at the 52nd International Art Exhibition, Biennale of Venice. Jacir participated in the Palestinian Pavilion during the next Biennale in 2009, creating a site-specific public project, stazione, which would take place in Venice during the exhibition. Stations along the Grand Canal would display the stop location names in Arabic and Italian linking the city’s connections to the Arab world, but the project was cancelled without explanation by Venetian city officials.

In 2010, the Alberto Peola Arte Contemporanea in Turin, Italy, presented a solo showing of Jacir’s working, including stazione, featuring the proposal photographs of what the stations would have looked like as well as the Vela Vaporetto (water bus) map translated into Arabic with a brief explanation the work’s background and context.