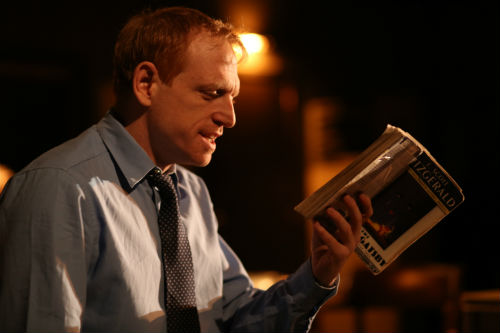 Elevator Repair Service (ERS) opened Gatz—its nearly eight-hour staging of F. Scott Fitzgerald’s masterwork The Great Gatsby—at REDCAT last week, bringing to an expectant Los Angeles the production that New York Times‘ theater critical Ben Brantley hailed in 2010 as the “most remarkable achievement in theater not only of this year but also of this decade.”

In the ERS production, a drab office and its workers are somehow transformed into the wealthy and well-heeled denizens of East and West Egg, Long Island.

Director John Collins and the cast of 13, which includes CalArts alum and faculty member Robert Cucuzza (Theater MFA 11), have committed to Fitzgerald’s text like few adapted film and stage productions do: Gatz is a word-for-word reading of the entire novel about the aloof millionaire Jay Gatsby, his opulent parties and his mysterious past.

There’s something seductive about the performers’ relaxed grace, the casual ease with which they move between fictional realms and the enjoyment they take in their own freedom. They might have a tongue-in-cheek air about them, but their commitment is total….

The text is king — an arrangement that is only fitting for a novel that may just be the most exquisitely written work of American literature. This isn’t to say that “Gatsby” is a perfect novel. The work is memorable less for its plot than for its swanky 1920s Long Island milieu, for its exposure of the dirty secrets of the American dream and for its cascade of miraculously poised sentences.

Gatz continues at REDCAT this week with performances Tuesday through Sunday with best availability for the midweek shows. Because of the length of Gatz—approximately 7 hours and 45 minutes, including a dinner break and two intermissions—all shows begin at either 1 or 2 pm in the afternoon.