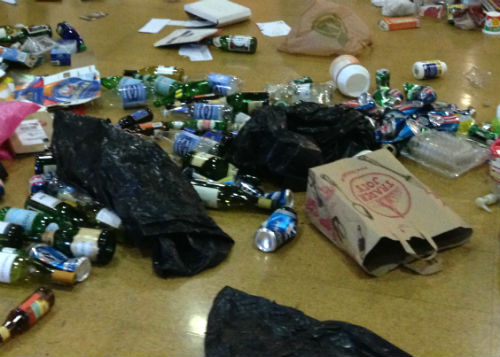 On the afternoon of Dec. 6, visitors to CalArts were treated to an odd installation near the main entrance—garbage—strewn about by students in CalArts’ faculty member Christine Wertheim’s Critical Studies class, Rubbish! On the History, Politics and Philosophy of Dirt, Trash + Shit.

Wertheim asked her 20 students to record in a journal all of their waste items for the duration of the semester, in order to quantify the amount of trash disposed of by humans each day. For the last two weeks of the class, students physically collected their non-organic rubbish, which was presented at the Institute’s main entrance and Main Gallery.

Wertheim is an artist, poet, critic and performer, who, with her sister, Margaret Wertheim, co-directs the Institute For Figuring (IFF), a nonprofit organization that curates exhibitions and seminars on the intersections of art, science and mathematics. The CalArts class is an offshoot of an IFF project that examined the devastating impact of plastic trash on the world’s oceans.

…We investigate the development of waste-management systems, including dumping, recycling and repurposing. We explore different ideas about what constitutes “waste,” “rubbish,” “trash,” “dirt”, “garbage,” “shit.” And at different practices and excesses pertaining to these phenomena in different societies. Also at ideas about re-fused or dirty people in various cultures. We also look at e-waste, its lifecycles and international politics, as well as at some of the many issues surrounding plastic, such as the Great Pacific Garbage Patch. Topics also include nuclear waste, the wastelands of modern war, the realities of recycling, and different kinds of art, architecture and other commodities made from modern waste. Lastly, we look at the related issues of hygiene and cleanliness, to examine who’s doing the cleaning and how are they situated within various social orders.

In the final project’s program (printed on recycled paper), the class shared rubbish-related facts (for example, the average American discards 4.43 pounds of garbage every day) as well as findings from its own recordings (food-related and bathroom-related trash were the categories with the highest levels of waste by-products over the course of the semester’s eight weeks).

We’ve posted a photo gallery of the class’s trash, above. Suffice it to say, certain beverages and items from one grocery store remain popular with the CalArts community.