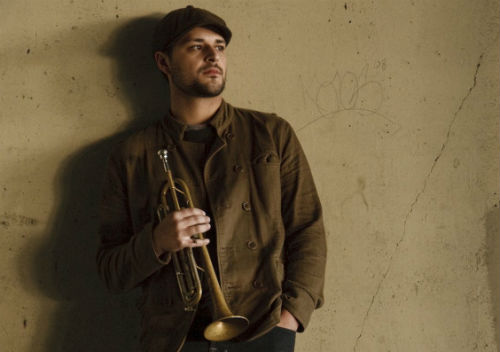 The year ahead may prove to be a game-changer for CalArts alumnus Daniel Rosenboom, recently named by the Los Angeles Times as one of the “Faces to Watch in 2013.” Rosenboom was the sole selection in the Jazz category, described as a “trumpeter, composer and more.”

The latter part of that description is a nod to Rosenboom’s eclectic interests that reach beyond the realm of traditional jazz, from the acoustic jazz-rock of The Daniel Rosenboom Septet to the electro-Balkan-gypsy-jazz-rock sounds of his band Plotz! Also adding to an already impressive portfolio has been Rosenboom’s work with multi-instrumentalist/composer and CalArts faculty member Vinny Golia, collaborations with the Heidi Duckler Dance Theatre, as well joining vocalist Josh Groban’s 2011 world tour, which included stops at Madison Square Garden and Le Gran Rex in Paris.

The Times‘ profile described Rosenboom’s upcoming project, Book of Omens, due out later this year:

Rosenboom, who’s a product of the fertile graduate program in music at the California Institute of the Arts, sets the controls even further out with the ambitious, genre-mashing “Book of Omens,” (slated for release this spring). The album is inspired by a myth about the end of time and rebirth of the universe, resulting in songs that range from ominously abstract to explorations of the scorched middle ground between free-blowing experimental jazz and dark metal. It may not always sound like “jazz” per se, but it does sound like the work of a musician dedicated to exploration and expression, regardless of anyone’s imagined boundaries.