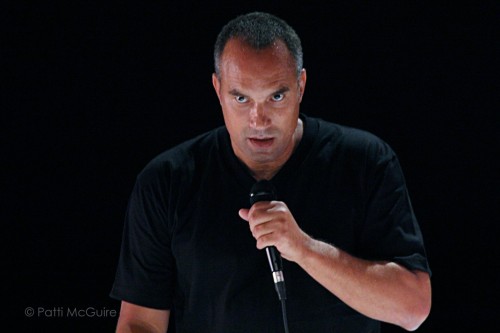 Tomorrow (Jan. 22) for one night only, celebrated solo performer and former CalArts School of Theater faculty member Roger Guenveur Smith returns to CalArts to present a free performance of his one-man production, Rodney King, on the Walt Disney Modular Theater stage at 8 pm.

Presented by the CalArts Center for New Performance, the show will be followed by a panel discussion, The Echo of Nightsticks: Recording, Reenacting and Remembering Rodney King, convened and moderated by writer-poet-performer Douglas Kearney, a member of the School of Critical Studies faculty.

Forever ingrained in the annals of LA history, it was King who was beaten by LAPD officers in 1991, with the incident videotaped and broadcast around the world. The officers’ eventual acquittal of major charges the following year sparked civil unrest in Los Angeles—the most deadly in U.S. history.

“I was exceedingly moved when I got the news that Rodney King had passed [last year]. I wanted to know why it was that Rodney King should matter to me and why, perhaps, he should matter to an audience,” says Smith. “The piece is actually set up in a series of questions. The man who was called Glen by his family and friends, and who became this person, ‘Rodney King,’ was a kind of multimedia invention. I call him the first reality television star.”

The issues of documentary, biography, history and mass media will be explored by the panel, which includes Guenveur Smith; Amanda Beech, an artist, writer and Dean of the CalArts School of Critical Studies; Jervey Tervalon (novelist, dramatist and editor of Geography of Rage: Remembering the Los Angeles Riot of 1992).

Guenveur Smith’s performance at CalArts follows a workshop production at Los Angeles’ Bootleg Theater in August-September 2012, with Rodney King slated for its formal premiere at the Bootleg in April.

Below is Rodney King’s final interview: