Above is the teaser trailer from J.R. Hughto’s Diamond on Vinyl.

As we’ve previously posted, CalArtians made an unprecedented appearance at Sundance and Slamdance Film Festivals this year—screening 16 films. With Slamdance closing tomorrow (Jan. 24) and Sundance wrapping up on Jan. 27, press for the films has already started rolling in.

At its core Hughto’s film challenges and uproots the perceptions and roles deemed fit for society, giving us an intimate, ultimately empathetic, but no less easy to handle character study. Buoyed by McGuire and Kinski’s superb performances, Diamond On Vinyl is surely a highlight of this year’s Slamdance. 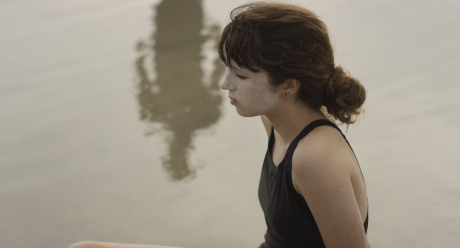 The film is an intimate and tender look at female sexuality that allows for a feminist interpretation of this scenario that has historically been viewed through a misogynist lens. … “It Felt Like Love,” marks the arrival of a new crop of talent to watch, behind the camera and in front.

The film was also one of Filmmaker Magazine editor Scott Macaulay’s top picks at Sundance.

Last week, Jung Jake, aka Jake Patterson (Art BFA 12), was named as Possible “Breakout Art Star of Sundance” by LA Weekly for his performances at the festival.

To see stills of all CalArtian films in the festivals and to visit the artists’ websites, visit the School of Film/Video’s festivals page.