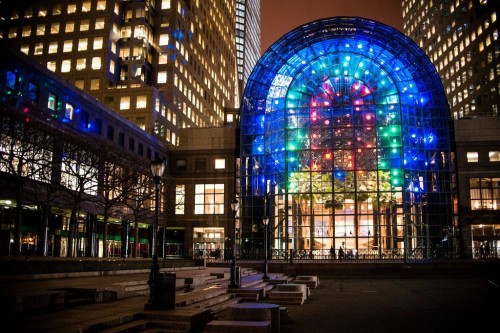 More about Militello’s installation from a Brookfield Place press release:

Each evening after sunset, the LED panels on the discs will turn on for the exhibition’s nightly display. Drawing inspiration from the rich variety of color shifts seen in natural phenomena, Militello will be on-site for two weeks in January to program new compositions of shifting movements and patterns which will be stored and then replayed throughout the remainder of the exhibition.

A veteran performance and architectural lighting designer, Militello has lit performances by notable musicians Tom Waits, Robert Plant and Alison Krauss, and received numerous awards including “Themed Lighting Designer of the Year” from Lighting Dimensions International. She was honored for her work on The Amazing Adventures of Spider-Man at Islands of Adventure in Orlando, Florida. Militello was appointed Head of Lighting Design Program at CalArts in 2011.