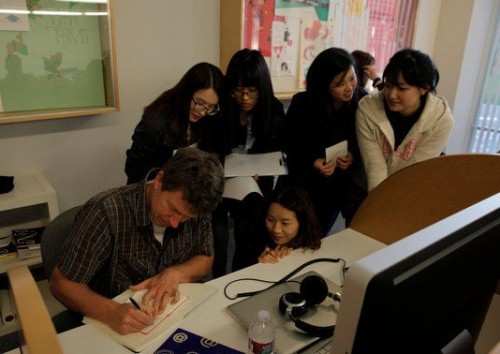 For the past three weeks, 30 students from Hongik and Kookmin universities in Seoul, South Korea, have been studying Design and Techniques of Motion Graphics during CalArts’ January Institute, a program that offers specialized learning for participants from CalArts’ international educational partners.

The three-week course culminates tonight (Jan. 25) with the Winter Motion Show, a screening of the students’ works, at 8 pm in the Bijou Theater.

Coordinated by CalArts Graphic Design Program Co-Director Michael Worthington and the Office of Global Initiatives, the Hongik and Kookmin students met rigorous requirements to participate in the intensive, which for the past two years has been held between the Fall and Spring semesters.

During the course of the term, the students visited LA-based design and film studios—Disney Animation, Rhythm & Hues and Prologue among them—and took hands-on motion graphics classes with both CalArts faculty and industry professionals.

One of the visiting artists was Danny Yount, a graphic designer and director of main titles for film and television, who taught several sessions and presented a lecture and screening of his work for the entire contingent. His portfolio contains many recognizable sequences from films such as Sherlock Holmes: A Game of Shadows, Iron Man 2 and Six Feet Under.

Here are Yount’s closing credits for Sherlock Holmes: A Game of Shadows: