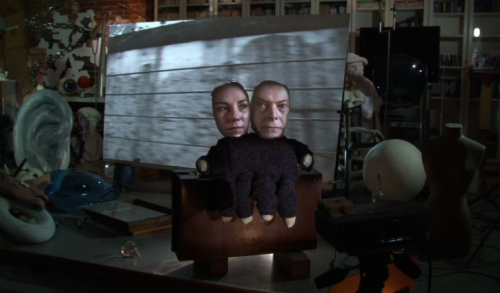 Screenshot from David Bowie’s ‘Where are We Now’ video by Tony Oursler.

Rock legend David Bowie surprised the music world by releasing his first new song in 10 years, “Where are We Now?” on his 66th birthday without much fanfare. He dropped the song in iTunes on Jan. 8 for fans to discover on their own and also posted the video on his website. The single—from the forthcoming album The New Day—shot to the top of the charts in eight countries on the day of its release.

Generating as much buzz as Bowie’s new music is the accompanying video, directed by CalArts alumnus Tony Oursler (Art BFA 79). It’s an homage to the musician’s “Berlin Trilogy” period of the 1970s, during which he released the now-classic albums Low, “Heroes” and Lodger. Oursler’s video also proved popular, hitting number one on the iTunes charts in 17 countries and logging more than 1 million views on its official YouTube channel.

Paul Gallagher of Great Britain’s The Independent interviewed Oursler at length about the Bowie video, which eerily projects Bowie’s face onto a conjoined doll. Writes Gallagher:

…the video would not look out of place at the Turner Prize, which is no surprise given the creative engines behind it.The centrepiece is a conjoined rag doll with two faces projected onto it: Bowie’s and Oursler’s wife, the abstract impressionist artist Jacqueline Humphries. It is a technique that Oursler, one of the world’s leading video and installation artists, has trademarked.

In the interview, Oursler also revealed that he was only given a month to produce the video, but Bowie was fully prepared:

“David had a fully articulated vision in his head. It was an exercise to tease this vision out, which was quite easy, and articulating it fast. I asked him what he saw and he described it all: the figures, the screen, the size of the screen, how much material to use. It was a crystal vision of what it was going to look like. It was really his conception. I was completely flattered that he wanted to come to my cave and fulfill this.

More of Oursler’s works will be on view in several upcoming exhibitions, including the large-scale The Influence Machine on Feb. 15-16 and 18-19, installed along the riverfront landscape of the Tate Modern in London.