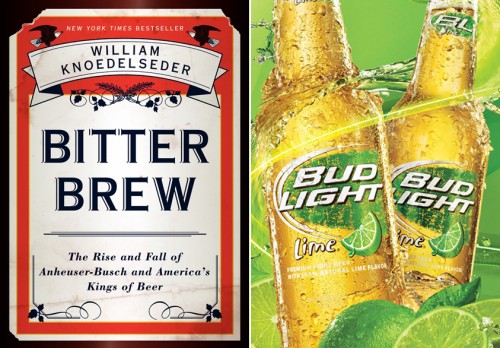 Tom Dibblee, an MFA 2 student in CalArts’ Creative Writing Program and editor of Trop Magazine, recently wrote a review of William Knoedelseder’s book Bitter Brew: The Rise and Fall of Anheuser-Busch and America’s Kings of Beer.

“Bud Light Lime, Unlikely Hope,” published earlier this month in the Los Angeles Review of Books (LARB), was a critical look at Knoedelseder’s history of the Anheuser and Busch beer dynasty—but on another level, the piece served as an homage to, and defense of, Dibblee’s preferred drink of choice: Bud Light Lime (BLL).

Dibblee acknowledges the sniggers from microbrew devotees or the cocktail crowd that populate the LARB readership, but he makes his case for Bud Light Lime:

With Bud Light Lime, I never find myself slumping over the bar, turning every 30 seconds to watch the door in the hope that some imagined friend will walk inside and pick me up and fix all my problems. With Bud Light Lime, that kind of attitude isn’t even possible. Because it’s hard to be morose while drinking a sweetened, lime-flavored beer, yes, but also because being morose requires a self-seriousness that Bud Light Lime completely forbids. And, to speak to the skeptics in the audience: yes, they do serve Bud Light Lime in bars. Mulligan’s in Valencia has it, but they won’t give you the happy hour price that applies to regular, unflavored Bud Light and Budweiser….

I wrote earlier that I like BLL because it helps me shed the burden of sophistication. What I meant by that was, with a BLL in hand, I am free to say out loud that I like the singer Adele. And that I think high-end cheese makes for a boring topic of conversation. And that I can see the problem everyone has with Jonathan Safran Foer’s Extremely Loud and Incredibly Close (shameless sentimentality), and that I didn’t really like that book all that much, but that I got weepy during its last 50 pages anyway. And why is this important? I know some writers who I think are hemmed in by their sense of sophistication, by the fact that they know they shouldn’t like Adele, or Foer, or Bud Light Lime, and who, as a consequence, write in a frightened, soul-stunted way.

Last week, Dibblee’s review was featured in The Atlantic’s column, “The Week’s Best Pop-Culture Writing.” He was in good company, as other selected authors that week included Erin Overbey for her  “‘Girls’—the ’20s Version” from The New Yorker and NPR’s Anne Powers on “Justin Timberlake Suits Up and Steps Out.”