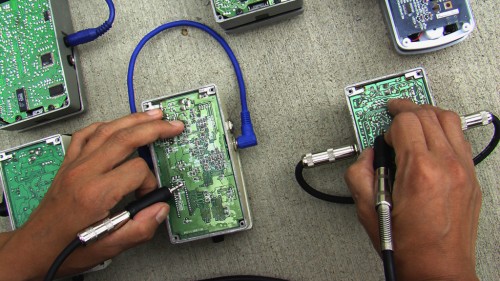 On Thursday and Friday (Feb. 7-8) at 8:30 pm, the CEAIT (CalArts Center for Experiments in Art, Information and Technology) festival is back at REDCAT, featuring writer-musician Bonnie Jones on night one, electronic musician Keith Fullerton Whitman on night two and selections from the South Korean record label, Balloon & Needle, on both evenings.

Jones’ “no-input” style of sound-text performances make use of internal feedback mixers, cracked delay pedals, hacked electronics and other custom-made instruments. REDCAT’s program notes explain that she short-circuits her board to play her electronics “in ways that manufacturers would never recommend.” Below is a piece Jones performed in October at the Museo Universitario de Arte Contemporáneo in Mexico City:

REDCAT describes Whitman’s form of electronica as generating “shimmering drones and deep waves of sound,” together with improvised guitar. Multiple critics have commented on the accessibility of Whitman’s music. “No other drone or ambient release [in 2003] could touch [Whitman’s] emotional heft,” said Pitchfork writer Mark Richardson. Below is a set of generative (ever-changing, systemic) music Whitman recorded in June:

Both nights include selections from South Korean record label Balloon & Needle, which was founded by members of Puredigitalsilence and Piwacot. The label “highlights pioneering musicians of Seoul’s burgeoning experimental music scene.” Below is live performance by Jin Sangtae at Kuchu Camp in 2010: