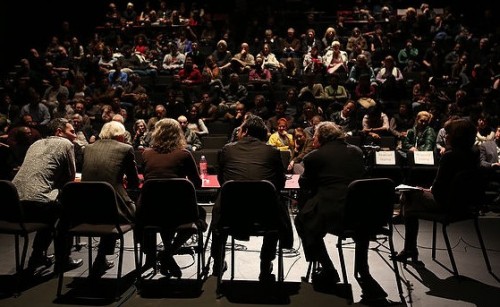 CalArts alumni, faculty, current students and film history buffs filled the Roy and Edna Disney/CalArts Theater (REDCAT) on the evening of Feb. 6 for a centennial celebration honoring and remembering Alexander Mackendrick, the legendary director and founding dean of the School of Film/Video at CalArts. Mackendrick (1912–1993) was born in Boston, moved to Scotland and was educated at the Glasgow School of Art. He directed a string of entertaining and influential films in the U.K., including The Man in the White Suit (1951) and The Ladykillers (1955), and then in the U.S. with Sweet Smell of Success (1957) among others, before beginning his 24-year tenure at CalArts in 1969.

A panel of film experts who worked with, studied under or wrote about Mackendrick kept the audience rapt with stories about the demanding yet generous auteur. His insightful directing and teaching methods made an impact on hundreds of film students and established rigorous standards that continue today in the School of Film/Video. Three of Mackendrick’s former students: director James Mangold (Film/Video BFA 85)—whose films include Girl Interrupted (1999), Walk the Line (2005) and 3:10 to Yuma (2007); writer and filmmaker F.X. Feeney (Film/Video BFA 76); and Paula Foster Chambers (Film/Video BFA 86), founder and CEO of The Versatile PhD, a career advisory service for academics, explained how their beloved “Sandy” instilled in his students the importance of craft as the key to creating compelling stories and powerful imagery on film.

“He would say, ‘I don’t think we should talk about art,’” said Feeney. “He said, ‘We should talk about craft. If you can make the film technically good, the art will come.’ He’d bring down the arrogance of a young filmmaker with hard core practicality.”

“He modeled what it is to be a film director,” Mangold said. “He showed me through his behavior what it was to be a kind and disciplined leader of men and women who would get the best out of people and not settle for half measures.”

Mangold recalled how Mackendrick suggested that he study acting after his first two years at CalArts as a way to expand his directing toolkit. Mangold enrolled in classes in the School of Theater for his junior year before resuming his studies with Mackendrick his senior year. “It was probably the most fun of my life,” Mangold said.

“He taught us that to be a good director, you have to act; you have to receive someone else’s directions,” said Chambers, a former assistant director. She described one of Mackendrick’s class assignments in which students edited their own versions of a Gunsmoke episode–starting with all of the coverage that had been amassed, so that they could better understand the working method of a professional director.  “He instructed us to choose another student to direct our screenplays, so that the focus would be on craft, not on you and your ego.”

While Mackendrick had a reputation for being tough on his students, the alumni panelists said that he cared deeply about them. Mangold, who served as Mackendrick’s teaching assistant one year, said that Mackendrick once had to ask a disruptive student to leave a class. After it ended and the class exited the room, Mackendrick and Mangold were cleaning up when the student returned in an angry state, holding a machete. Mackendrick calmly took the machete-wielding student to his office, with Mangold following behind. Mackendrick closed his door, and after many minutes, the door opened and the student left the office without further incident. “Sandy told me later that he convinced the student that it would be best if he took a break from school,” Mangold said.

“Probably the most important point for me to relay is what a lovely man he was, and that will stay with me forever,” Mangold said. “He wasn’t only crushing things—he also took the time to reach out to his students. I felt for years after leaving CalArts that I would be OK, because Sandy believed in me.”

The panel, moderated by Deborah LaVine, co-director of the Film Directing Program, also included director and cinematographer Kris Malkiewicz, who joined CalArts in 1968 and taught alongside Mackendrick for many years, and Paul Cronin, who edited Mackendrick’s 2004 book On Film-Making: An Introduction to the Craft of the Director, still considered a definitive text on the subject.

Steven D. Lavine, whose early years as CalArts president were Mackendrick’s last five at the Institute, said that, “even with Sandy gone, his values and commitment still reside deep in the film program. That’s what you hope for in great educators. Their influence goes on and on.”