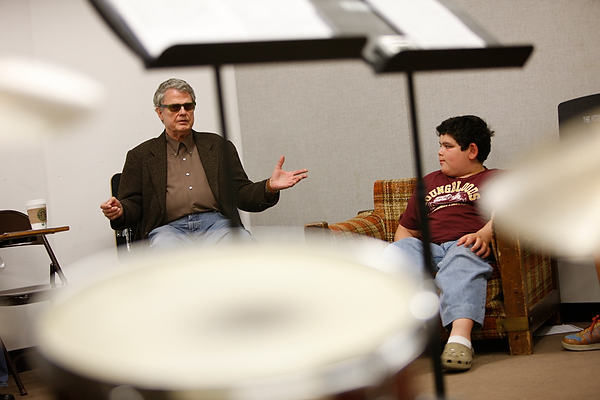 During this past weekend’s Grammy festivities, Charlie Haden—bassist and longtime faculty member of The Herb Alpert School of Music at CalArts—was honored with a Lifetime Achievement Award by The Recording Academy. The special merit award, voted on by The Academy’s National Trustees, is presented to performers “who, during their lifetimes, have made creative contributions of outstanding artistic significance to the field of recording.”

At the presentation ceremony on Saturday evening (Feb. 9), Haden gave a moving acceptance speech (posted below) in which he talked about his music career and the people who helped him along the way, particularly his wife of 30 years, Ruth Cameron, and their family. He also acknowledged his bluegrass beginnings in the Ozarks as well as the “incredible musicians” with whom he’s collaborated throughout the years—from Ornette Coleman to Pat Metheny.

Haden also mentioned CalArts, sharing with the audience the advice he passes onto his students: “I’m thankful to be a teacher at California Institute of the Arts, where I founded the jazz studies [program]. The students give me so much back with their dedication and enthusiasm. I tell my students that if you strive to be a good human being with the qualities of generosity, humility and having a reverence for life, just maybe you’d become a great musician.”

As part of the special merit award festivities, tributes to the honorees were posted on Grammy.com. Red Hot Chili Peppers bassist Flea, a six-time Grammy-award winner, wrote about Haden’s style and influence:

Despite the sophistication and technical brilliance of his playing, which comes from a soul enthralled with the folk and country music he grew up on as a toddler, the bebop he fell in love with as a teenager, a highly intelligent mind and body, work ethic disciplined enough to learn it, the countless hours of practicing and studying the music he loved … , despite the highly cerebral music he has played, his music is still for everyone. No matter how far out or evolved he has gotten, his music has always been for all humans, not for academics. His sound is one that touches everyone — it will make you weep, dance like a lunatic, and sit back and listen to the story unfold. The most highly spiritual thing that anyone can do is have faith and be completely in the moment. When Charlie Haden makes music, that’s exactly where he is, and that is what enlightenment is.